Ron Johnson’s Failure Was Due to Low CQ, Customer Quotient

Ron Johnson’s departure from J.C. Penney last week can be attributed to his low CQ, that is, Customer Quotient. 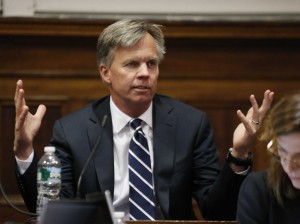 1.  He didn’t know who his customers were.  Johnson didn’t know, or perhaps he didn’t care, that existing JCP customers are middle-aged, middle-income women who like middle-of-the-road styles and brands.  Instead he wanted to attract new customers — a younger, “sexier” segment of the population — and in the process of pursuing them, he alienated the customer base that had been keeping – and could continue to keep — the company afloat.

2.  He didn’t know what his customers wanted.  Johnson was hell-bent on eliminating his customers’ “addiction” to coupons and sales, without understanding that cold turkey is the hardest way to cut someone off from her drug of choice – and that promotions contribute to the thrill of discovery that retailers must foster in their customer experiences.

3.  He didn’t know that his employees were also his customers.  Johnson alienated his employee base with an autocratic style and lack of clear communication. Plus, his refusal to move from California to the company’s Plano, TX, headquarters probably not only made employees resentful about the cost of supporting his commute, but also limited his ability to bond with his employee community.

Now it’s up to former CEO Mike Ullman to undo the damage and raise the organization’s collective CQ.   How?

First, start inside.  Ullman should start by addressing his most critical customers, his employees, by reinvigorating the organization culture and focusing everyone’s efforts.  He needs to reassure employees that there is a bright future for the company and enroll them in dedicating their hearts, minds, and actions to achieving it.  Instead of arbitrarily setting a vision as Johnson did, he should crystallize the desired culture into values, beliefs, and principles, and engage the best and brightest talent who remain at the company in cultivating them in everything it does.

Ullman also needs to sign-on smart marketers and merchants, since many left during Johnson’s tenure. This won’t be an easy task since flailing companies don’t typically attract good talent, but having the right people in the organization must be the top priority for every leader, especially for an interim CEO.

Then he must determine who are his best (external) customers and prospects and learn what they want and need.  I’m sure it’s relatively easy to identify the brands and products that appeal to the “middle America” customer and to figure out the right combination of everyday value pricing plus aggressive short-term promotions to jump-start traffic.  The store-within-a-store format championed by Johnson still has merit as a way to align the JCP brand with more desirable ones like Levi’s and Michael Graves and to make JCP stores more of a destination.

A final move to engage with customers on their terms would be to reduce the company’s large retail footprint.   Although the company enjoys relatively low-cost real estate, it doesn’t need it.  That is not to say that brick-and-mortar is dead – rather, it’s the size of the retail space that seems to be working against the brand.  Customers just don’t seem interested in shopping in large moderate department stores, especially when there are H&Ms and Forever 21s opening locations that are large enough to offer a sizable range of categories and styles but small enough to create a focused experience, as well as Kohl’s and Targets that have won over recession-strapped customers.

To whatever extent is possible, Ullman should parcel out some of JCP’s retail space to others through leases.  And perhaps it should consider a more creative and aggressive store-within-a-store strategy in which featured brands don’t simply dominate an area of the retail floor, but they actually take over a section of the store and build out their own discrete store environment and retail experience. In doing so, JCP would be speaking to what its customers really want – a focused and relevant shopping experience.

Establishing higher CQ will take time, but just like EQ, it can be raised through training and practice.