Randy Garutti on the Secrets of Shake Shack’s Success

If you judge a restaurant’s success by how long a line of customers it attracts, then Shake Shack is surely a winner.  The popular burger and shake chain attracts multitudes of devotees to its nearly 20 units in the U.S. and abroad.  What’s its secret?  CEO Randy Garutti joins us to share: 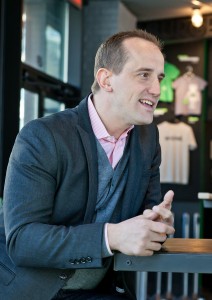 Randy brings quite an impressive background to his current role.  Previously he oversaw the operations for Union Square Hospitality Group, Danny Meyer‘s company which owns Shake Shack.  His success there was recognized by Crain’s which included him on the Top 40 under 40 list.   He was also the GM for several restaurants including Canlis in Seattle and was named one of the Top 50 General Managers in the country by Nation’s Restaurant News.  You can follow Randy on Twitter at @randygarutti.

See you on line at Shake Shack!

If you’ve been in Manhattan and noticed a very, very long line queuing, you’re probably around the corner from a Shake Shack. Shake Shack is a restaurant chain that has tons of devoted fans who wait for hours at all hours of the day and night and in all kinds of weather for one of its burgers and fries and frozen custard shakes. A couple of months ago, I had the pleasure of hearing the CEO of Shake Shack, Randy Garutti, speak about the company’s story and philosophy and I was so inspired, I’ve asked him to join us today. Welcome, Randy.

Randy: Hi, Denise. How are you doing?

Denise: I’m good. So, Randy, you’ve previously describes Shake Shack as using these four words: thoughtful, considered, crafted, correct. Can you say more about what these words mean and explain how they inform what you do?

Randy: I sure will, and this was never intended to be four words that we use to describe Shake Shack. When Glen Collins of the New York Times did an article about us when we had two, we had just opened the second shack, he called us the anti-chain chain and used those four words. You know, crafted, considered, correct.

And it really, we had never talked about ourselves that way. Shake Shack was a total accident. It was built to support an art project in a park and sell a few hot dogs. We never dreamed, and in fact it even took us five years to open the second, and at that point even we hadn’t imagined the international reach that we’d be talking about today. But the way we think about it is, we’ve taken, what happened to fast food in the burger joints over the last 50 years that took them from being these great community centers to being, how fast can we get you in and out of here? Stuff you with calories, make it uncomfortable and bring in the next guy.

We’ve stripped down every bit of that experience and said who ever wrote the rule that it has to work that way? And, with that, from everything from burgers to custard to the way the shack feels, we have said, let’s craft this as we have for 28 years in our fine dining company, Union Square Hospitality Group. Let’s consider every option here and make sure that when we make a decision, we stand for something good and let’s do it the right way. And that’s really how we have designed Shake Shack to take every bit of the restaurant business and say how can we do it just a little better to make it more impactful?

Denise: It sounds like your thinking and your decision making has to be very principle and very disciplined in order to stay true to that.

Randy: Without a doubt, without a doubt. And we surround ourselves and our team with a good mix of people who have come from our, mostly people who came from our fine dining ranks here in New York City. So they bring with them the kind of thinking that is against all the way that people who grew up in chains work.

And then we balance that with people who are veterans of the industry and really experienced. And when we all sit around that big table to have a discussion about anything important in our company, we have this incredible tension that forces us to think differently and challenge each other.

Denise: Wow. Well, I’m sure that one of those discussion areas has to do with growth. So, with your restaurants being so popular, people would think that you probably would be interested in opening a lot of new locations as quickly as possible. Can you talk about what your approach is to growth and how do you make decisions about where and when to open new restaurants?

Randy: So, we want to grow appropriately. Shake Shack is about being a community gathering place above everything and it would be really easy to open all over the country or all over the world really fast. We honestly get a lot of phone calls to do that and that’s just not who we want to be. And that doesn’t mean we don’t want to grow. We want to grow and we want to grow responsibly and at a point where, when we decide to grow, it has to pass a couple tests. The location needs to be a site that can potentially be that gathering place. It needs to be at a time when we’ve developed enough leaders who we feel will do the great job of running that restaurant. And it needs to be at a time when, by opening that new Shake Shack, it made every other Shake Shack stronger.

Randy: And if we can’t do those things, then we’re not going to grow until we can. And next year we’ll probably do six or seven Shake Shacks here and then we’ll probably do a few more internationally with our partners. We just announced this morning that we’re going to go to London in the Covent Garden for the first time.

Randy: So we’re really excited about that adventure into the UK. And we’re going to take it one burger at a time.

Randy: Make sure that we protect this brand and this company above all.

Denise: Right. Right. Okay. So, another question about growth is in terms of menu. And I know that restaurateurs always struggle with when to add new items, which items to add, managing the size of the menu relative to consumer demand and operations complexity. Can you talk about your approach there?

Randy: Yeah. And we’re very fond of saying we didn’t invent the burger and a shake and fries and we sure won’t be the last people to create one. When we looked at it initially, we said how can we do this better? Let’s do it all natural. No hormones, no antibiotics in our protein. Now, let’s find the highest possible ingredients and let’s develop them in the way that we have for our fine dining restaurants in the past. We created this core menu that became Shake Shack. That has changed very little in our nine years of existence and it should really never change that drastically.

What we do want to do is add a few things. For instance, this year, we finally added bacon after, for years people said how can you now have bacon? And we didn’t want to add bacon until we knew we had a source that was also all natural, hormone and antibiotic free and stick with what we did. So, our thinking on menu is to innovate slightly around the core. We don’t want to change the core. We’re burger, fries, hot dogs, frozen custard restaurant. That’s what we do. That’s a lot.

Randy: And we don’t want to just try to be all things to all people. I think that would be a road to failure.

Randy: And I think people come to us because they want a simple version of that classic thing without all of the craziness.

Randy: And that’s, we focus on doing a few things really well. Every now and then we come up with some fun, new ideas and we add them.

And we test it out and usually people like to see our culinary chops a little bit, so we throw some fun things out there that really.

Denise: Good. Cool. Well, last question. When you spoke at Dine America, you said something that really stood out to me. You said, “The bigger we get, the smaller we need to act.” What did you mean by that?

Randy: And the moment you say, “Oh, well, we can’t do that anymore. Remember when we used to be able to do that when we only had three restaurants?” If that’s the kind of decision we start making, then we’ll just be like everybody else. And we’re not. And we’re going to fight that all the way and constantly remind ourselves to act small as we grow.

Denise: Wow. Well, Randy, this has been so inspirational and informative. Thank you so much. For my listeners, you can learn more about Shake Shack by going to shakeshack.com or Shake Shack’s Facebook page or Twitter feed, or you can follow Randy himself on Twitter. His handle is @RandyGarutti. Again, Randy, thank you so much for sharing how you’ve built such a great brand.

Randy: Thanks, Denise. Talk to you soon.

Denise: Talk to you soon. Bye-bye. That’s it for today. Thanks for listening to the Brand-As-Business Bites podcast. Be sure to subscribe to the podcast on iTunes so your brain will always be filled with good stuff to chew on. For more information, or to contact me directly, please visit my website at DeniseLeeYohn.com. Take care and thanks again.