I had the pleasure of attending two concerts in the last couple of weeks – and although they were entirely different experiences, I came away with the same impression: if brands were like rock stars, they would win over people’s hearts and minds for life.

The U2 concert at the Anaheim Angels’ Stadium was mind-blowing. 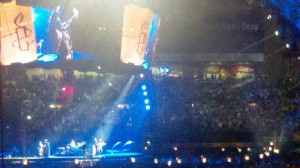 I was one of sixty thousand fans who were treated to a spectacle of immense proportions with a multi-million dollar set that featured a four-legged claw structure, an expandable digital screen, and rotating bridges. Bono and his band of brothers rocked the house for over 2 hours, with everyone dancing, singing, and partying.

The Jason Mraz performance was on the other end of the experience spectrum. 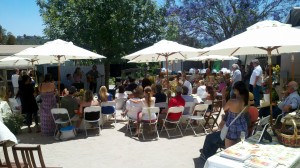 Approximately 60 folks gathered at Seabreeze Organic Farm for a Farm to Table Brunch. The day, which included a scrumptious brunch prepared by Chef Gordon Smith, music by Ariah Firefly and Dawn Mitschele, and cocktails by Snake Oil Cocktail Co., culminated in Jason performing a few songs. The day was lovely, intimate, laid-back.

Despite the very different experiences, I walked away from both feeling as if I had gotten glimpses into the souls of these two men – and I was really touched by what I saw.

Both were extremely humble. Bono’s love and respect for The Edge was clear, as he spoke glowingly several times about him. Paul McGuinness, U2’s longtime manager, came on stage for the first time in the band’s history and Bono told the audience that without McGuinness, there would have been no U2. He also gave major props to Lenny Kravitz who opened the night and did a tribute to The E Street Band saxophonist Clarence Clemmons who had died earlier that day. He talked about Representative Gabrielle Giffords, dedicated “Pride” to Maria Shriver, and mentioned guests like Rick Warren, pastor of Saddleback Church. These weren’t mere celebrity shout-outs; rather they came off as sincere words of care and respect for others.

Jason demonstrated his humility when he invited the other performers to join him. He gladly let them take the lead and he seemed to genuinely enjoy sharing the moments with them. He didn’t fuss when his mic kept on dropping out and he was extremely generous with the amount of time he spent meeting people after his performance. Most importantly, the event was promoted without mention of his participation – because it was about the farm, not about him.

Which brings me to my point about passion. Jason is deeply committed to whole living and natural foods (he even has his own avocado grove) and he actively shares his passion with others. His personal blog features links to, among others, superfoods Vitamineral Green and E3 Live Blue Green Algae and Cafe Gratitude ice cream. From his comments at the brunch, it was clear his participation in the event was a demonstration of his passion for the cause.

Bono’s passion for human rights played a major role in his event. In fact Amnesty International has been a part of U2’s 360 Tour from the very beginning, with thousands of volunteers attending the concerts to promote its campaigns and a huge truck-like structure as part of the stage set-up. Bono talked about Aung San Suu Kyi, the pro-democracy Burmese leader who was held under house arrest for 15 years, before he sang “One” while the AI volunteers came on stage carrying glowing lanterns to symbolize the lives still under oppression.

Both artists were clearly having a lot of fun and didn’t seem to take themselves too seriously. When Bono sang “Until the End of the World,” one of the guys brought out some flowers and Bono embraced him in a little dance. Later he cracked a few jokes about the criticisms his Spider-Man musical was getting and chuckled at himself when he messed up one of the lines of “Amazing Grace.”

Jason had his own opportunity to make fun of himself when screwed up a line while attempting to make his “You F***-in’ Did It” song lyrics appropriate for the family audience. He also cracked some very corny jokes and got the audience laughing with some wacky mid-song improvs.

All of these things combined made each man seem real. They were open, they showed they cared, they were themselves. By not trying to impress, they indeed were very impressive.

Which got me wondering why brands can’t be like that. It seems most brands are trying to impress, instead of trying to be real.

Instead of showing humility, they opt for chest-beating (think of all those “anthem” spots) and stage hogging (how many times have you heard “make the logo bigger”?!). Instead of cultivating a passion and sharing it with others, they do “corporate social responsibility” and then exploit the causes they support to get props from their customers. Instead of having fun even when it’s at their own expense, they talk in corporate speak and over-react to criticism.

Not all brands are like this, but too many are. It’s too bad “I’m Yours” and “In the Name of Love” are only song titles and not taglines.