business is now an action sport

Kick it off. Drop the ball. Setbacks. A free pass. Take it over the finish line. Follow-through. The vocabulary of sports penetrates the business world. Due to the highly competitive nature of business, the concept of teams meeting on the playing field for a fierce contest has clear application to business as we’ve known it.

But business is changing – market forces like globalization, increasing rate of technological change, and economic instability, to name a few, are changing the very fundamentals of how businesses compete and win today. And so, while historically the business analogies have come from established ball sports like football, baseball, and basketball, perhaps different parallels should be drawn now. 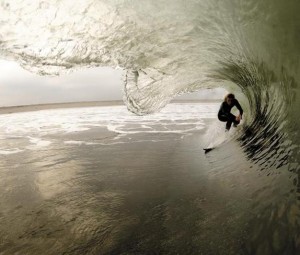 As I listened to Alex Striler, action sports pioneer and author of X Play Nation of Action Sports

, speak at a recent San Diego Sports Innovators event, I heard three things which distinguish action sports from mainstream sports that apply to how business is evolving.

1. progression through evolution, not domination.

In most traditional sports, two players or teams compete and then one wins, one loses. The sport is a test to see whose strength, skills, and strategies are better. At the very basic level, you progress by beating out others.

In action sports, however, you actually progress through failure. As Alex described, “Action sports is about one person falling down, getting up, trying again, and getting better, and then others learning from him.” The sport is a series of experiments to see how far you can push the limits and to figure out what it takes to nail a trick.

Business today seems to be shifting to this evolutionary approach. No longer is the primary objective simply to beat out your competitors and dominate the market. You must evolve what you do and how you do it to accommodate – anticipate actually — the changes in supply and demand.

That’s not to say competition isn’t important. But, focusing on dominating the market assumes a static source of business and very few markets demonstrate that stability now. Companies must evolve to serve new sources of business, push their limits, and experiment with transformative innovations that create new markets and new competitive landscapes. (Brand guru David Aaker explains this point in an interview I recently conducted with him.)

2. allegiance to the sport, not the team.

Traditional sports thrive on team allegiance. The fierce rivalries between Yankees and Red Sox fans or Lakers and Celtics fans are good examples.

Likewise most players of these sports identify strongly with the teams they play for. Free-agent or not, and celebrity or not, there’s a sense of loyalty to the team. A-Rod’s commitment to the Yankees serves as a great case in point.

Action sports thrive on allegiance to the sport or to action sports as a whole. This isn’t simply because almost all action sports are individual ones. Action sport athletes — and their fans — are far more passionate about their sport and advocate for it than do golfers, swimmers, or tennis players for theirs.

Boarding greats like Shaun White and Tony Hawk have served as ambassadors for their sports, recruiting young kids, fighting for rights and respect, and broadening the sports’ appeal. Further, the frequency with which action sports athletes cross over into other action sports demonstrates how the entire field of action sports resonates as a whole.

The parallel to business today is the need for companies to cooperate and oftentimes partner with competitors. Instead of viewing competitors as rivals, companies need to join together to share resources, advance common causes, and promote their categories.

In many cases the more competitors in a field, the better, because it accelerates adoption. Five Guys Burgers and Fries CEO Jerry Murrell recently expressed this point of view in commenting about his main competitor, In-N-Out Burger: “We help them and they help us…The more In-N-Out grows, the better it is for us. It creates a better image for the industry. The more better-burger [establishments] around, the better it is for everybody.”

Also as government regulation and consumer power increase, companies find strength in numbers. Companies banning together to combat e-commerce sales tax proposals and to advance the acceptance of behavioral targeting methods are just a couple of examples of how category (like sport) allegiance is increasing in importance.

3. power held by sponsors, not owners.

In most traditional sports, team owners control the dollars. With this power, owners drive decisions on personnel, facilities, community relations, etc. As such the success of the team largely rests in their hands.

The power in action sports is held by sponsors. When ESPN decided to launch X Games, it provided a much needed platform for action sports. Before that, people could only learn about action sports through videos that were passed around the community. Now broad awareness and support is generated by the TV coverage.

Other sponsors have made it possible for action sports athletes to go pro, since the purse of many action sports contests is miniscule compared to traditional sports’. And when sponsors like do things like Red Bull building a secret half-pipe for Shaun White to work out new moves, they play a critical role in advancing the sport itself.

In today’s business world, customers can be classified as “owners” or “sponsors,” and power increasingly lies with the latter. A brand’s users are the equivalent of owners and they certainly dictate its success to some extent through their purchases. But more and more now brand success relies less on the transactions alone and more on advocacy and community, and a brand whose customers act like sponsors is more likely to succeed in the long run.

Customer sponsors are brand ambassadors, fueling word of mouth and spreading the goodwill. They’re committed for the long run and they encourage their friends to be too.

Alex Striler opened his talk the other night by describing action sports as the “combination of innovation and inspiration.” Sounds like a fitting description for business today.