What do cameras and sandwiches have in common? A lot, Jonathan Kaplan hopes.

The creator of Flip Video, the super-simple camcorder device that provided a lot of the initial fuel behind YouTube’s early growth, has gotten a lot of press lately about his latest aspiration: The Melt, a nationwide chain of restaurants offering gourmet variations of grilled cheese sandwiches.

Kaplan has set his sights on opening five restaurants in the San Francisco area by Thanksgiving of this year and 25 nationally by the end of next. So he’s lined up an impressive set of partners including celebrity chef Michael Mina and advisors like Sequoia Capital’s Mike Moritz. Let’s hope he’s working with some smart marketers as well.  After all, when it comes to marketing, cameras and sandwiches don’t have a lot in common. 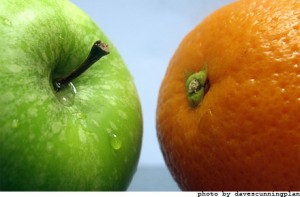 I’ve been thinking a lot about the differences between the two categories, since I’ve worked in both consumer electronics (CE) and quick-serve restaurants (QSR), on brands like Sony and LG for the former and Jack in the Box and Jamba Juice for the latter. There are definitely some substantial differences in the marketing challenges between them.

In CE, marketing must demystify the product, while in QSR marketing, it must mystify it.

Most people need to be convinced that a new technology product is not complicated – that it will do what you say it does and it will be easy to set up and use. As such straightforward marketing approaches are the most effective in CE – Apple’s success with its demo-like commercials exemplify this point.

But when it comes to QSRs, people need to perceive the offering as special and something they can’t make at home or get elsewhere. Marketers create an aura around the product through romance, theatre, and storytelling. A good example is Chipotle’s Food with Integrity platform – through it, the company has made a basic food item, the burrito, seem quite captivating.

Because of the nature of innovation within the CE category, companies are often introducing a new behavior when they launch a new product. Taking informal videos and then immediately sharing them online may seem so natural now, but only a few years ago when Flip was first introduced, it really hadn’t been possible. Many new CE devices often open up new ways of doing things that people never even dreamed of, so a large part of the marketing task in CE is to introduce and evangelize the new behavior.

In the QSR space, people are generally quite familiar with the category. People’s expectations are already set by existing players, so they’re either relatively satisfied with their options or disillusioned by them. Either way, the marketing task is to prompt a fresh look at a familiar offering. Instead of a promoting a new way, you’re promoting a new choice.

Also the differences in the “transactions” involved in the two categories make the marketing challenges different between them.

On the other hand, the perceived risk of a $8 lunch is much lower for most people, so marketing a QSR is less about risk reduction on a single consumption. It’s more about prompting multiple purchase transactions. You need to provide reasons for frequent return visits.

Which leads me to the final difference – how loyalty is judged between the two categories.

The difference is based on something CPGers commonly refer to as “share of requirements.” If you buy 10 tubes of toothpaste in a year and 7 of them are Colgate-branded, then Colgate is said to have a 70% share of your requirements. In consumable categories, gaining a higher share of requirements is the prevailing goal because most consumers are not 100% loyal to a brand. Even if you prefer Colgate, you probably end up buying Crest sometimes for a variety of reasons. Marketing is considered effective if the aforementioned 70% share of requirements can be raised to 80%, for example.

The same is true in QSRs. A frequent QSR user visits QSRs an average of 25 times a month. With rare exceptions, those 25 visits are distributed across several brands. So, the marketing task is to get more of the 25 — and customer loyalty is best measured by transactions and sales volume.

But in CE, people usually only own one brand of device at a time, maybe 2 or 3 if we’re talking TVs or cameras. Share of requirements becomes less meaningful in this context and loyalty is better measured by feelings of affinity or frequency of advocacy.

When considered together, the difference between CE and QSR marketing can be characterized in two words — relevance and differentiation. In consumer electronics, establishing relevance to the consumer is the overarching marketing aim. You want to get the consumer to see themselves in the story of your product. For quick serves, differentiation is the name of the game. You want to get consumers to see your brand as unique and special relative to other choices.

It will be interesting to see how Kaplan’s foray into the restaurant business goes. I for one am eager to sink my teeth into a goat cheese and mint sandwich, so I wish him well.