McDonald’s Metro: Lipstick on a Pig

If, as they say imitation is the sincerest form of flattery, fast casual restaurants should be flattered by the recent efforts of McDonald’s and other quick-serve restaurants.  Many fast feeders are trying to emulate chains like Chipotle, Smashburger, and Panera, since fast casual players have stolen share from them for the last couple of years and outrank them in customer studies.

So these companies should be flattered – but not worried.  Because despite QSRs’ best attempts to mimic their more upscale competitors, their efforts haven’t been successful to date.

Take McDonald’s Metro for example.  I had read about the opening of this new concept on the famed Las Vegas strip.  Billed as the world’s first and only Metro, the store opened a couple of weeks ago with a flashy party replete with red carpet and live DJ.   McDonald’s official Josephine Wee was quoted by several sources saying “The restaurant…creates a unique experience for diners.”

So I made a point to visit the location while on business in Sin City last week and was all set to do a Brand Experience Brief to relay the findings of my audit of this “unique experience.” But upon visiting the store, I realized I would have very little to say.

Sure the site was very cool-looking.  The wood and metallic building materials gave the place a contemporary feel – as did the digital menu boards and crisp black employee uniforms.  And I was pleasantly surprised by the fun furniture, graffiti-like murals, and mod lighting fixtures.  The place used all the cues of a fast-casual restaurant. 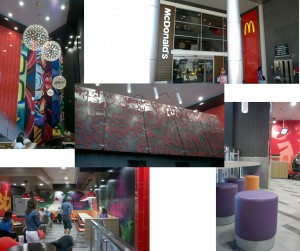 The disconnect came at the menu board, though.  It offered the same food and the same drinks as any other McDonald’s.  I ordered a breakfast burrito to see if there would be anything “fast casual” about it, but the tray it was served on, the packaging it came in, and the ingredients it was made of all were “fast food.”

I walked away from the store feeling as if McDonald’s had simply put lipstick on a pig and called it “Metro.”  If the company intended to provide a fast casual experience, it fell far short.  And McDonald’s is not alone.  I’ve encountered the same phenomenon at other fast food chains.  An upgraded restaurant experience is about more than a cool environment – it’s about the food.  It’s a restaurant, after all.

And therein lies the broader point.  A brand experience is comprised of everything the customer experiences.  Improvements in only one area are not enough to compensate for shortcomings in others.

It’s common knowledge that customers aren’t fooled by entertaining or flashy advertising.  The same can now be said about design.  A veneer of style or higher quality will only get you so far.  Customers won’t pay more or go out of their way for something that only looks better.  It has to be better.

And that’s why, at least for now, fast casual restaurants have nothing to worry about.

brand experiences that are better: