building influence in the workplace: it has to be personal

(This is the second in a two-part blog series on influence and leadership.  This post is written by Terry Starbucker, who has been in the business world for over 28 years in a variety of leadership positions, and regularly writes about his experiences in his blog, “Ramblings From a Glass Half-Full” . He is also a co-founder of SOBCon, a biannual live conference event designed to help entrepreneurs achieve success in both the online and offline worlds. The first post, called “Ideas Plus Influence” and written by me, appeared on Terry’s blog on December 2. )

How do we become influential leaders? There’s a certain magic (and danger too) to being in that position, where virtually everything that comes out of our mouths is tagged with importance, legitimacy, and truth, whether they actually have that distinction or not. 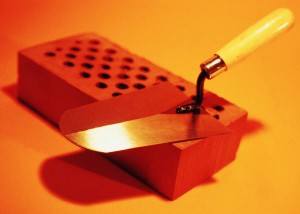 That’s quite a powerful thing to wield in the workplace, and it certainly comes with a responsibility to use it wisely.   But that’s another post.

What I’d like to talk about is HOW that influence is obtained in the first place.

Contrary to what it may seem on the org chart, just bestowing a title and authority on someone doesn’t automatically pass along great influence.  Can someone move things along on title alone?  Sure they can, but without influence to grease the wheel, it’s bound to be a lot more difficult.

Building influence is hard work. It doesn’t happen overnight.  It’s like building a house brick by brick.  And the reason why this is so is because real workplace influence, the kind that enables rapid and often transformative progress, and ultimately great success, can only be earned one person at a time.

It has to get personal.

And the only way to do that is spend a lot of time outside your office.   Listening.   Absorbing.   Interacting.   Building relationships.    Assessing personalities and how everyone absorbs and processes information.   And yes, being transparent and open about themselves.

This is critically important among your direct reports, but it has to go well beyond that.  It has to get personal with all the people you want to influence, and that includes your bosses, your peers, and all the staff that flow into your direct reports.

Each “brick” of your influence house is made of trust and respect – as you forge these personal relationships, you will be judged worthy of these things based on how well your actions matched your words (I’ve seen more influence lost by broken promises than any other thing).

Once the bricks start accumulating and your influence house takes shape, it’s at that point where your initiatives start to get a lot more traction.    At your level of the organization, problems get resolved quickly, and more importantly, diplomatically and with relatively little friction, because you have forged these relationships, and can work inter and intra departmentally, and up and down the org chart, with ease.

At the rank and file level, the staff are more responsive to your strategy and vision, because you have met many of them individually, gained a greater understanding of the collective “psyche” of the group, and tailored the messages accordingly.  When the message comes down, your influence is felt because they really KNOW you, and they feel you are talking to them, and not just pushing down orders.

Then the success happens, more bricks accumulate, and the house only grows stronger.   But the leader, now flush with an even greater influence, has to resist the temptation to start to start coasting and cut back on the relationship building, letting the ego take control.

With influence, it always has to be personal.  Even once it is obtained and the house is built, it must be properly maintained, lest the house become a house of cards, collapsing because much of its foundation had been neglected.  (In other words, we can never get “too big for our britches”)

One last thing to consider – the prospect of “putting yourself out there” in the way I am suggesting can be a daunting task, especially for the more introverted leader.  There’s certainly a fear factor involved.

My advice, based on over 28 years of building influence houses myself, is this:  The reward is really worth the risk.    Go for it. Be influential.