What do Ford and Delta Airlines have in common?

More specifically, what does the following ad for Ford’s new Edge and an announcement by a Delta SVP about improvements at the airlines’ LaGuardia terminal have in common? 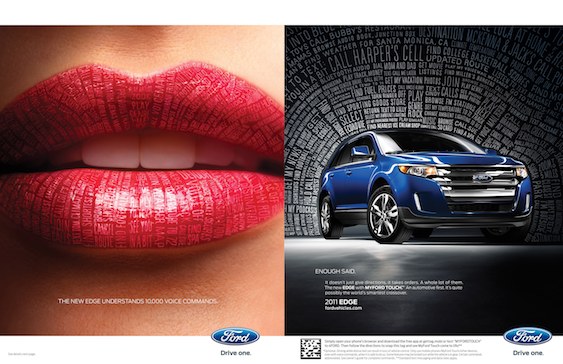 They’re examples of what could be called “value shifting.”  Value shifting happens when the thing(s) which used to represent the most value to past consumers is replaced by something else which today’s consumers value more.

In Ford’s case, consumers used to value the power, safety, or quality of a car; now, if the Edge ad and others like it from other automakers are any indication, those things have become less important. The value in automotive has shifted to technology.  And so the Edge ad doesn’t promote the car’s horsepower, fuel efficiency, or safety features (all of which are superior to the competition) – instead the ad shines a dramatic spotlight on MyFord Touch, the technology platform which integrates phone, entertainment, climate control, and navigation into an easy-to-use voice-controlled system.  What once might have been offered as an ancillary upgrade – e.g., a “technology package” – is now the focus of the entire car promotion.  Pretty remarkable.

Equally noteworthy was that when one of Delta’s executives spoke as a corporate sponsor of a global business conference, he chose not to talk about the airline’s Business Class service or its expanded routes, or even the company’s strong profitability.  But rather, he took the opportunity to address over 4,000 business leaders about the new food offerings at the airlines’ terminal at LaGuardia airport.  And just this week Delta announced it is rolling out another food-related service enhancement at JFK and LGA which allows customers to order meals directly from Apple iPad kiosks stationed near their departure gates, with delivery guaranteed within 10 minutes. That an airline company would invest billions of dollars on improving the in-airport experience suggests the value of air travel has shifted from the air to the ground.

Value shifting usually is a result of commoditization or innovation or both.

When a category matures, differentiation between competitors declines.  Every brand seems to be offering the same thing and so consumers start making purchase decisions based on price.  To offset this commoditization, companies often try to divert resources and attention from the things which no longer differentiate to the things which do.

I suspect that this is what’s driving Delta’s focus on the airport experience.  Most of the traveling public would agree there is little discernable difference between the seats, food, and service of different domestic airlines.  Price has become the primary basis for choice.

As such, Delta is attempting to shift the value of flying Delta from the price of an undifferentiated in-air experience to an on-the-ground airport experience that defies price comparison.  Promoting the airport terminal developments, Rick Blatstein, CEO of OTG, Delta’s airport terminal partner, explains, “We are giving travelers a one-of-a-kind experience by bringing great food and beverages from world-renowned chefs to the gate area. By combining cuisine with innovative seating and ordering technology, we are offering a truly unique airport travel experience.”

Innovation is probably the driver behind Ford’s effort in value shifting.  Developments in digital, mobile, and wireless technology have exploded in recent years and so now what used to be a very expensive proposition for very limited capability has now been made much easier and more affordable to offer to consumers.  These new capabilities drastically improve the car driving and owning experience, so it makes sense to attribute more value to the car’s technology.

But value shifting doesn’t always have to be a response to a change.  It can be a result of a company’s proactive decision to change people’s value perceptions.

A few examples of proactive value-shifting come to mind, some of which already exist:
–    Packaging which makes eating a big hamburger on-the-go easy shifts the value offered from taste to convenience
–    Retailers which entertain or educate shoppers shift the value from products to the experience
–    Appliances which are sold with an automatic upgrade service shift the value from the single purchase price to the total cost of lifetime ownership
–    Fitness clubs which sell services, devices, and content all accessed through multiple channels shift the value from the in-club experience to a lifestyle change
–    Designer consumer electronics gadgets shift their value from features and functions to status and style

Can you think of others?  Let me know by leaving a comment, because it would be great to develop a list of value-shifting thought-starters which companies could refer to.  Challenging category norms by using value shifting to shape value perceptions enables companies to: