herman miller, a business lab disguised as a furniture company

I was fascinated by the story told in a recent strategy+business piece about Herman Miller, Inc., the “office-furniture maker.” 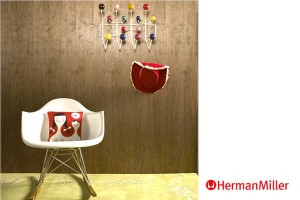 That descriptor belongs in quotation marks because it seems the company is as adept at building breakthrough business practices as it is its cool Aeron chairs.  The article offers a peak into the great company behind the great brand.  I’ve culled from the piece insights about what Herman Miller is designing in its business lab:

1.  change as a strategic advantage – Most companies may tolerate change and the best ones anticipate it, but Herman Miller has embraced it in a way that would cause companies half its age to marvel.

The company has successfully undertaken fundamental changes to its business model and its culture throughout its long history (the company was founded over one hundred years ago, in 1905) — change from investing in the current product stream to funding a skunkworks operation; from adversarial relationships with its suppliers to a consultative ones; from batch manufacturing to lean manufacturing; from static furniture to programmable environments.

It’s not been easy – the strategy+business piece calls the prospect of change “mind-bending” as it relates the story of the company’s search for a manufacturing solution to address encroachment from lower-priced competitors.  But the company’s willingness to change, combined with its capacity to execute it, is remarkable.

2.     360 degree collaboration – The company’s skillful practice of positive, productive collaboration originates in its tradition of hiring outside designers.  In its early years, it engaged Charles and Ray Eames to produce groundbreaking designs including the iconic Eames Lounge Chair.

Its collaboration with designers continues today, with its recent hiring of experts to inform the development of its Creative Office. The outside team has created a “stream of innovations” from which the Herman Miller executives choose a subset for development.

This open-ness to partnering with outsiders shapes practically every aspect of the business.  It works with its suppliers to implement the lean manufacturing principles honed in its own plants, providing its own experts to work on suppliers’ shop floors to introduce the changes.

The company also is using collaborative partnerships to gain new capabilities, calling on a building manufacturer to teach it how to build infrastructure.  In return it is teaching its dealers how to be as “healthy and successful as possible – and to help them best represent Herman Miller’s strengths.”  Its engineers regularly visit dealer sites to observe installations, identify waste to cut, and to reduce delivery time by improving logistics.

3.    market- not product- or materials- oriented design – When given the bold aspiration of doubling the size of the company’s business playing field in 3-5 years, the researcher in charge, Gary Miller, began by asking, “What are the unsolved problems out there?”

He didn’t limit his investigation to conventional fixtures (using LEDs only as substitutes for standard incandescent light fixtures, for example) – nor a conventional approach to design.  As his team examined trends and studied current products, they discovered, “Incumbent companies plied the waters of many established, but separate, oceans of commerce – but none were exploring the unchartered waters in between them.”  So that’s where they focused.

With this market-oriented approach, the company “has moved itself from selling furniture to providing the entire building enveloped with intelligent infrastructure.”  And in doing so, it has identified adjacent markets which will provide new streams of revenue at a time when its core business is flattening.

4.    business school for all employees – Participative management has been a key operating approach at Herman Miller.  Max De Pree, CEO of the company in the early 1980’s, explained the philosophy: “Each of us, no matter what our rank in the hierarchy may be, has the same rights: to be needed, to be involved, to have a covenantal relationship, to understand the corporation, to affect our destiny, to be accountable, to appeal, to make a commitment.” (emphasis mine)

This meant that when markets contracted in the 1990’s, the company instituted EVA (Economic Value Added) training for all employees in order to restore the firm to solid profitability.  “It didn’t matter if [employees] were involved in buying, selling, building, designing, billing, paying, or financing…they were expected to embed EVA into their thinking.”

More recently, the current downturn has once again put the company under serious financial pressure and it has furloughed its employees every other Friday.  But also once again it is teaching its employee base how to employ a broad business mindset to keep the business sustainable.  Using a wage recovery plan which pays people back for lost wages if the company reaches its goals, CEO Brian Walker believes employees learn “to make progress through the management practices that had sustained the company for so long…”

5.    new ways of thinking – A common thread runs through the company’s history – challenging the norms.  A few examples:

Boundaries not briefs – As noted previously noted, Gary Miller, the leader of the LED project didn’t want the usual ideas so he engaged an unusual team.  Prohibiting the hiring of furniture designers, he instead got a special effects designer, a computer designer, and an architect to form the team.  And instead of a product brief, he simply gave them boundaries.  This structured freedom approached yielded a host of innovations which “reinvent many aspects of office interiors” and “redefine how people would think about personal space, office geometry, privacy, and illumination.”

Advocacy not approval – Miller also took a norm-busting approach to managing up.  He offset the “not-invented-here syndrome” and “the tyranny of the urgent” by asking the CEO, CFO, and two other leaders to sit on his internal board of directors.  “The objective was to have top decision-makers invest themselves in the work…’The idea,’ he says, ‘was to change the dynamic from traditional review-and-approve to advocacy.’”

Balance not blow-off constraints – Charles Eames, taught the organization that “the first task of a designer was to recognize ‘constraints,’ including factors like price, size, production, time, strength, and support, and that the best design was the one that best balanced them.”  Instead of pursuing the artistic purity of “good design,” the company has sought to answer the “real questions:  Does it solve a problem?  It is serviceable? How is it going to look in ten years?”

I hope you are as inspired as I was by this peak behind the curtain at Herman Miller.  What other companies are operating their own business labs?  Please let me know.