Is content marketing is dead?  This question was on many people’s minds at the Social Media Marketing World 2016 conference (#SMMW16) a few weeks ago. 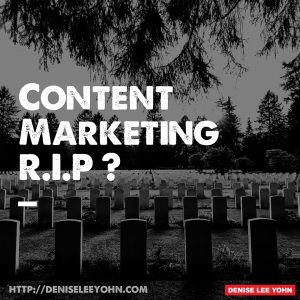 Although the vast majority of speakers at the event made it clear that we’re nowhere near the death of content marketing, concern is understandable.   More content is being produced now than ever before, but the effectiveness and readership of that content is declining.  Consider a few troubling statistics:

Moreover, in one of the SMMW16 sessions, social media guru Mark Schaefer declared, “The economic value of content that isn’t seen or shared is zero.”  A lot of heads nodded in agreement.   It seems as if the content in content marketing is being subordinated to the marketing.  In other words, what your content is seems to becoming less important than whether or not it is shared.

This troubles me.  As someone who relies almost solely on thought-leadership marketing, content is the lifeblood of my efforts to become known, be considered for, and get booked for speaking and consulting engagements — and it’s the primary way I try to cultivate and add value to my business relationships.  I invest extraordinary amounts of time and energy producing (what I hope is considered to be) quality content.

I put less emphasis on the marketing and sharing of my content.  Of course, I actively promote my content on Twitter and I regularly publish an e-newsletter to an exclusive list of executives.  I sometimes post about my content on Facebook or LinkedIn and I curate a Pinterest board.  My website and all of my social posts incorporate SEO and include sharing buttons.  And I do strategically select contributorships and byline opportunities based on the shares they usually produce — but even in those cases, I usually favor quality over quantity of sharing.

But I don’t advertise my content on Facebook or any other platform; I don’t do any search engine marketing; I don’t use marketing automation or link bait.  I’ve resisted publishing breezy free e-books like many of my colleagues do because I’m more committed to providing substantive content than simply generating awareness and followers.  I even bristle at the thought of writing headlines or content with the primary objective of making them search-engine friendly.

I’ve understood the consequences of these choices.  I don’t have nearly the awareness or following that I would like and I’m working on improving.  But I also know I have a limited amount of bandwidth and I’ve always thought it’s better to spend it on the actual content.  Said another way, I believe that the economic value of content depends more on the content and less on the marketing.  I believe if content has staying power, is compelling to its primary target audience, and can stand up to scrutiny, it has more lasting value than a quick content blast.  It’s like the difference between a $1.50 burger from McDonald’s and a $5.00 one from Shake Shack.  The former may cost less, but the latter satisfies way more.

Three recent events have confirmed this belief for me:

This post itself may or may not get shared as much as a shorter, pithier piece with lots of links, images, and quotes.  But I wanted — needed — to write it in order to convey the economic value I ascribe to it, to make it a gift to my readers, and to serve as a positive representation of me.