So far we’ve covered GNC, Facebook, and Dairy Queen in our chronicles of brands which have failed to live up to their potential — today Tom Fishburne calls out a brand disappointment based on his own personal nightmare with Vonage,

For those of you who haven’t had the pleasure of following Tom, let me introduce you to this astute marketer with an uncanny sense of humor — he’s the guy behind the Brand Camp cartoons, which he writes/draws in addition to his “real job” as managing director of method products.  (Last fall I posted about Tom’s new book.)  In response to his post, perhaps we’ll hear from others about the ways Vonage has failed to live up to its potential.

This close to Valentine’s day, I feel compelled to share a brand love story gone awry.  It’s the classic “boy meets brand, brand over-promises, brand under-delivers, boy tells everyone he knows to avoid brand” cautionary tale.  In short, it’s the story of a “one night brand”.  Far too often, brands put all of their investment and focus on the up-front advertising and forget that the relationship doesn’t end at the point of purchase. 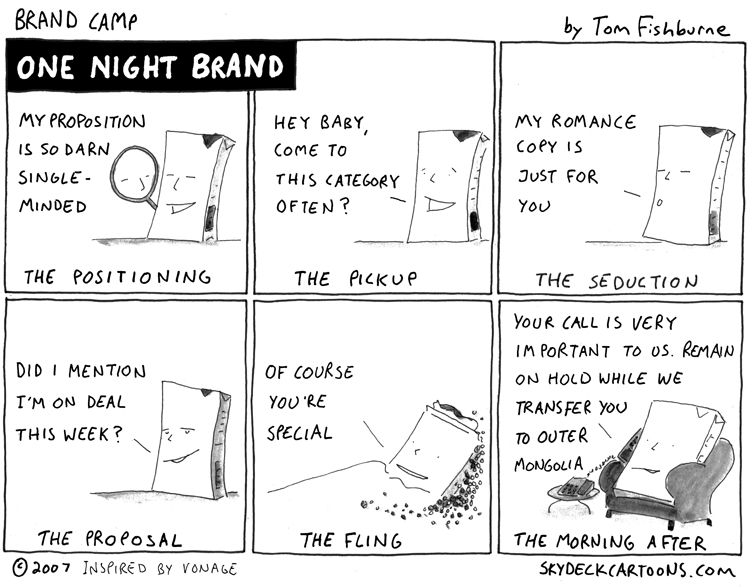 When I first heard about Vonage, the VoIP Internet phone service, it was love at first site.   The proposition was brilliant.  For a flat monthly fee, I could make international calls over an internet line.  Not only that, I could plug in my Vonage box anywhere in the world, and instantly make and receive calls.  I was in the process of moving from California to England, and I found this incredible.  Friends and family could call my Bay Area number, and my phone would ring in my London flat.  Sure, I’d have to put up with telemarketer calls at three in the morning, but this was a small price to pay for such an amazing service.

I was ready to become a Vonage groupie and tell the world.  I willingly plunked down my credit card number and signed up.  For me, the brand relationship was just beginning.  For Vonage, I quickly discovered, the deed was consummated and I was soon left out in the cold.


The proverbial morning after, I discovered just how cold.  The trouble started when the box simply didn’t work once we arrived in England.  No dial tone whatsoever.  We had to borrow a pay-as-you-go mobile phone to ring customer support.  A half an hour on hold (paying 50p a minute) resulted in a conversation with an apathetic agent armed only with a script that basically advised us to turn off the box and turn it back on.  The following month twisted and turned like a Kafka novel.  Call center agents progressively blamed our phone, hung up on us, claimed they couldn’t find our account, refused to connect us with anyone technical, blamed the cord, and blamed our internet connection.

Finally, a knowledgeable technical engineer agreed that it sounded like a technical error with the Vonage box.  But, he was only allowed to send a replacement to America.  So, we had a friend back home receive the box, ship it overseas to us, only to discover that the new box wasn’t the right voltage (after we plugged it in and it started smoking).

The next call center agent suggested that I sign up for a British account, cancel my American account, and then they could send me a new Vonage box.  In desperation, I agreed.  The next day, I called to check on the status and learned that I was being charged a hefty cancellation fee.  “But I’m only doing this to finally make my Vonage service actually work.”  The call center manager coldly replied, “but, you’re cancelling your service.  We don’t care why.”

I started searching online and discovered dozens of blog posts from jilted consumers like me.  The Better Business Bureau recorded 3,687 official complaints in one year.  We’ve all been there.  We’ve all been “Vonaged”.  We’ve all fallen in love with brands that flubbed the relationship the morning after.

A week later, I received a letter in the post from Vonage.  Hoping it was an apology from somebody important, I opened it.  It was a direct mail marketing brochure.  Like a lot of brands, Vonage placed its investment in outbound marketing.  I’m sure that it factors into detailed financial calculations on its “customer acquisition cost”.  But, it mystifies me that brands frequent over-invest in outbound marketing and under-invest in simple consumer service.  Consumers that could have been brand advocates become brand detractors instead.

Contrast this whole experience with that of an English smoothie brand called innocent.  In the early days, they had a “banana phone” (literally, a phone shaped like a banana)

in the middle of their office that would ring with consumer calls.  Anyone in the company could answer the phone.  Staff would literally fight over the privilege of answering the phone when it rang to talk to a consumer.  How refreshing would it be if every brand had a “banana phone” that was actually answered by someone who cared or truly worked with the brand?  How more likely would you be to spread positive stories about the brand if they did?