– the brain:  Stephan Aarstol, the CEO and founder of Tower Paddle Boards.  You might have seen Stephan on Shark Tank a few years ago.  Although his pitch was considered a major screw-up by many (thanks to a computer glitch), he ended up with an investment from Mark Cuban.  And Mark has gone on to say, “Stephan has done an amazing job growing Tower into a dominant industry force.  He is one of my best Shark Tank investments.“ 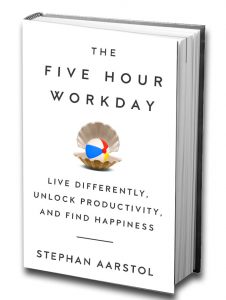 – the best bits:  As you can surmise from the title, The Five Hour Workday is about just that — designing your company so it operates only five hours a day.  It’s a practice that has produced great results since Stephan successfully implemented it at Tower a couple of years ago.  He reports that because everyone at his company only works five hours a day:

He also believes the five hour workday practice has the potential to solve some of the biggest issues in business today including the sluggish economy, widespread lack of work-life balance, and gender inequality.

Stephan was inspired to rethink work practices when he learned about Henry Ford and his approach to running the Ford Motor Company.  In an 1926 interview explaining why he reduced the working week in Ford plants to 40 hours with no cut in pay, Ford said:

The harder we crowd business for time, the more efficient it becomes.  The more well-paid leisure workmen get, the greater become their wants. These wants soon become needs…[They] have the leisure to enjoy life and the wherewithal with which to finance that enjoyment.”

Stephan has now adopted a similar stance with the five hour workday.  He writes:

You shouldn’t have to feel guilty for not working.  You get to choose what you do in this life, for the most part.  But in the current American culture, we seem to myopically be defined by how hard we work, and how much money we accumulate over the period of our lives…Most people are probably far better, and far more interested in other pursuits, than developing businesses or making money…That is what the five-hour workday is about.  Getting the ‘have to’ work done as quickly and efficiently as possible, and then unlocking this other productivity of society that is largely hidden and repressed today.”

Sprinkled throughout the book are his observations, life philosophies, and advice for other business leaders.

The story of Tower Paddle Boards is pretty incredible.  Stephan started the company to put his SEO expertise to work by selling paddleboards directly to consumers at a significantly reduced price.  In its first year the company did around $3,000/month in sales.  It closed out the next year just short of $250,000 in sales, and in year three, it did $1.5 million.

Stephan then set his sights on transitioning Tower into a lifestyle brand, rolling out two to three product companies a year for a beach lifestyle — from flip flops to bikes — using the same business model.  He’s already launched one, Sunglasses by Tower, and his company’s magazine Tower Magazine has over 25,000 subscribers.

He also wanted to create the best company culture in San Diego.  He writes that he realized as a brand Tower was “telling customers to take life by the horns. To live more extraordinarily.  To live differently.  To play more.  But were we really doing this ourselves?”  He discovered that the five-hour workday was the key to “authentically lead by example.  Leaving work at 1:00 p.m. every day would be an unavoidable daily reminder of the exact brand we aspired to be.”

Tower shows the kind of brand you can build when you combine a powerful market niche, a compelling brand vision, and an authentic commitment to corporate culture.

(In his book Stephan mentions my book, What Great Brands Do, and the brand-building principle “Great Brands Start Inside” as an inspiration while he re-thought his company culture.  I couldn’t be prouder of Stephan and Tower and I’m so happy to hear about the impact I had on them.)

– the bottom line:  The Five Hour Workday is a provocative book.  Like me, you probably won’t agree with everything Stephan writes, but in no way should that diminish its significance as an important voice in the conversation about business today.

Listen to my interview with Stephan to learn:

P.S. You can learn more about Tower in my recent Forbes article.