Pro football season is in full swing now, and as I watch the drama unfold every week on the field, I am once again reminded of how many business insights can be gleaned from the gridiron. 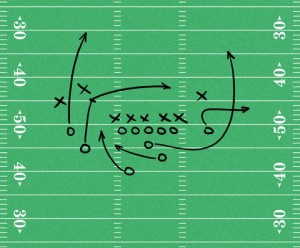 First and foremost, size doesn’t matter.  One of my favorite players is Darren Sproles, running back for the New Orleans Saints.  I actually still proudly wear the Sproles jersey I got from when he played for the San Diego Chargers because he is such an exceptional running back (he broke the NFL record for most single-season all-purpose yardage in 2011, running an impressive 2,696 yards.)

Darren deftly uses his small size to his advantage.   He’s only 5’6’, 196 lbs. and is commonly referred to as “little Darren Sproles,” which could easily be a challenge against linebackers who are typically over 6′ and weigh around 250 lbs.  But he’s also been called a “human Molotov cocktail” because of his speed, lower center of gravity, and ability to run though holes in the defensive line practically unseen by the larger players.

Smaller brands have the same opportunity to turn their size into an advantage as they battle larger, more established brands.  They may not have the marketing budgets to run large advertising campaigns but they can be more nimble in responding to changes in the market and they can take more risks because the downsides are more negligible.  Larger businesses might write-off a small brand as an unlikely competitor until it’s too late, as was the case for Apple in the 2000’s.  Back then, powerhouses like Sony in portable music, Motorola in mobile phones, and HP in computers didn’t consider Apple a serious threat because of its single-digit market share.  But Apple broke through seemingly impenetrable lines and achieved remarkable results the way Darren Sproles does every Sunday.

Pro football also teaches us that it’s not over until it’s over.  Unfortunately I’ve learned this too many times as a Chargers fan.  Time and again, my local team has broken my heart as it squanders a strong early lead.  Just a few weeks ago, I went to bed assured that the Chargers’ 3rd quarter 28-7 lead over the Houston Texans would translate into a victory only to wake up the next morning to news that the team had been quelled by interceptions in the 4th and lost 28-31.  I shouldn’t have been surprised — last season, the Chargers blew 5 halftime leads.

Monday morning quarterbacks and pro analysts have their theories about what the Chargers’ problem is, but I suspect it’s the issue shared by a lot of businesses – the lack of execution in the final moments.  They expend all their time and energy upfront and then they can’t, they forget to, they lose the will to, or they just don’t see things through to the end.  Companies create breakthrough ad campaigns, run creative promotions, present a sleekly designed store environment, and offer cool merchandise, all to get the customer in the store.  But then they don’t train their employees well enough to be able to answer customers’ questions, or they don’t wrap customers’ purchases up in packaging that conveys a quality brand image, or they don’t clean their restrooms and parking lots well.   And so the brand impressions formed by all of the upfront effort can be undone by the lack of strong execution in the end.  If you want to be a winning brand, you need to throw your last pass as well as your first one.

Finally it’s easy for spectators including myself to criticize a bad play or a seemingly stupid mistake on the field and wonder “How hard can it be?,” but the truth is, it’s not as easy at it looks.

In fact, last Sunday there was a fascinating write-up in the New York Times sports section about field goals.  It observed, “Field goals occur so swiftly, in about 1.2 seconds, and so regularly that they are often treated as afterthoughts. But a highly intricate three-part choreography is involved.”  The piece broke-down all of the elements of that choreography including how Giants’ holder Steve Weatherford ensures he places the ball in the right spot every time.

It’s clear such precision requires expertise, attention to detail, and a ton of practice.  Zak DeOssie, the Giant’s snapper, talked about analyzing videos of thousands of snaps to determine how to improve his performance by an inch.  Building a great brand requires that same level of commitment.

Crafting a strategic brand platform, engaging a brand-led culture, and designing a customer experience require a lot of hard work.  Brands like Starbucks and Nike may make it seem effortless, but behind the flawless execution are processes, plans, and programs that must be worked through.  In an effort to keep things simple, some leaders adopt a high-level approach, believing that if they just convey a few sweeping points, things will get done and people will figure it out — but they don’t.  It’s simple, but not easy.  That’s why Vince Lombardi gave his “This is a football” speech on the first day of pre-season training every year.  He knew success required perseverance, self-denial, hard work, sacrifice, and dedication.

Who knew football could be so enlightening?!  Before you turn on the game this week, let me know what business insights you’ve learned from pro football!