climbing to the top of business, part 2

Last week I started a mini-series inspired by Jim Collins, who spoke at the World Business Forum for which I had been invited to guest-blog (see my recap post of the Forum, the best bits from the speakers, and my souvenir photo of the Bloggers Hub).  My last post relayed nuggets of wisdom Collins’ has learned from scaling rock faces; today’s post is about what he learned researching businesses.
Collins is probably most well-known as the author of the book, Good to Great, which contrasts companies which “made the leap to great results” with those which remained simply good or mediocre.  It is an excellent text on what enables companies to achieve superior performance and I hear it referenced all the time by business leaders aspiring to greatness.  But before Good to Great, Collins (along with Stanford prof Jerry I. Porras) wrote Built to Last:  Successful Habits of Visionary Companies and it’s served as my bible on business success. 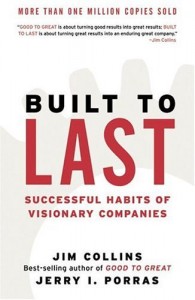 Like Good to Great, Built to Last is based on an extensive and intensive research project.  Collins and Porras studied 18 companies which met the following criteria

Companies such as 3M, American Express, Sony, and Walt Disney made the cut and earned the label “visionary.”

Collins and Porras chose the term “visionary,” rather than simply “successful” or “enduring,” “to reflect the fact that they have distinguished themselves as a very special and elite breed of institutions.  They are more than successful.  They are more than enduring.  In most cases, they are the best of the best in their industries, and have been that way for decades.  Many of them have served as role models – icons, really – for the practice of management around the world.”

The authors’ research found these companies share common management attributes and approaches – two in particular stand out to me:

1. BHAGs (Big Hairy Audacious Goals) – BHAGs are clear and compelling goals which serve as a unifying focus point of effort.  But more than goals, they are “huge, daunting challenges – like a big mountain to climb” (there’s another rock-climbing reference!)

Collins and Porras use the missive President Kennedy issued in 1961 as an example: “this Nation should commit itself to achieving the goal, before this decade is out, landing a man on the moon and returning him safely to earth.”  GE’s “To become the #1 or #2 in every market we serve and revolutionize the company to have the speed and agility of a small enterprise” was just as bold in its context.

What strikes me about BHAGs is they aren’t corporate-speak which supplicates company lawyers but fails to inspire everyone else.  And yet, they aren’t “yea, rah, rah” rallying cries which sound bold but don’t produce any action.

BHAGs can be distinguished from most corporate goalstatements because:

I keep these attributes in mind as I work with clients on their brand strategies.  We work on developing platforms which inform, inspire, and inject a bias for action.

Collins and Porras argue the importance of “core ideology”— “a set of precepts that plant a fixed stake in the ground: ‘This is who we are; this is what we stand for; this is what we’re all about.”  For example, Sony’s core ideology was created out of post-war Japan, when its founders created a “prospectus” to outline its role in resurrecting its country as a world leader.  One of the company’s “purposes of incorporation” was “to establish a place of work where engineers can feel the joy of technological innovation, be aware of their mission to society, and work to their heart’s content.”

At the same time, the Built to Last authors explain, “if a company just sits still or refuses to change, the world will pass it by.” So visionary companies tap the internal urge for progress to create new possibilities and always go further.  It was this internal drive which urged Sony to prove it possible in the 1950’s to commercialize transistor-based products when no other companies had done so and later to introduce the culture-changing “time-shifting” in the form of a VCR.

The key is to balance the two:  core and progress. “A visionary company carefully preserves and protects its core ideology, yet all the specific manifestations of its core ideology must be open for change and evolution.”

I see this balance get lost in the fast-paced innovation-driven nature of today’s business – in the pursuit of growth, too many companies fail to stay true what is core to their business.  They’re more focused on riding the latest wave of technology or the newest fashion trend and so they make compromises or allow distractions and lose their true north.  So I work with my clients to get crystal clear on what their core is and then apply that core to meet new challenges and seize new opportunities.

As noted earlier, these are only two of the many gems of wisdom I’ve learned from Built to Last.  The whole book is treasure trove of insights about extraordinary organizations which I reference and try to apply on a daily basis.  I encourage you to get a copy — I’m sure yours will end up as dog-eared and highlighted as mine.