climbing to the top of business, part 1

A couple of weeks ago I had the privilege of hearing Jim Collins speak at the World Business Forum (see my recap post of the Forum and the quotables from the speakers.)  Collins is the author of great business books like Good to Great and How the Mighty Fall…and Why Some Companies Never Give In.
I’m a huge fan of his and so I decided to do a mini-series on a couple of Collins-related topics.  Today’s post is inspired by some comments about one of his personal passion areas which he made at the Forum.  Next week, I’ll post lessons learned from his first book, Built to Last:  Successful Habits of Visionary Companies.
In the final moments of Collins’ session at the Forum, he was asked about his recreational pursuit of choice – rock climbing.  Apparently Collins tries to climb 3 times a week, so it’s not just a “hobby” for him, it’s his passion.  I can relate — at least sort of. 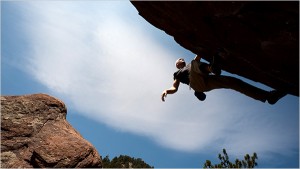 About 15 years ago, my husband and I decided to give rock-climbing a try.  Many of our dates nights were spent at the climbing wall on Manhattan’s Upper West Side where we learned the basics of belaying and body contortion.  We also took our altitude pursuits outdoors a few times, once in Joshua Tree, the other in Banff where we got up to a 5.5 or 5.6 (or so our very encouraging guide claimed.)

Although it’s been years since we hung up our climbing shoes, I still remember the high I got from standing on top of a rock I just scaled or touching the top pinion of the wall.  The moments of terror and the tests of will getting there were forgotten as I looked out from those high vantage points and felt a sense of real accomplishment.  For an “achiever” like me, it was that moment of completion which motivated me.

Collins explained why rock climbing is so significant to him:

1. the unforgiving nature of gravity – Collins explained that for most leaders, particularly when you’re young, you can talk your way out of incompetencies – make excuses, compensate.  But “gravity doesn’t care.”  Like rock climbers, leaders must perform in “unforgiving settings,” navigating a “continuous series of the not normal.”

In business, there are “big fast moving forces all facing a lot of gravity.” The ability to think clear-headedly when there are big risks involved is a skill leaders must develop.

For Collins, the side of a rock 100 feet off the ground is a good place for acquiring the skill — and testing it.

2. trusting your partner with your life – In rock-climbing, the climber is usually belayed by a partner – that is, one end of the climbing  rope is fixed to the harness of the climber and the other to the belayer.  The belayer’s job is usually simply to make sure that the climber has the right amount of rope by letting out or pulling in excess rope. But when the climber falls (and it’s definitely a “when” not an “if”), the belayer is the only thing keeping him/her from dying.  With the rope friction applied by the belayer, the fall is caught and the climber is safe.

“Far more important than what climb you’re doing is who you’re climbing with,” says Collins. For him, the dependency between the climber and belayer speaks to one of the most important business principles:  First who…then what.

In “Good to Great,” Collins explains, “We expected to find that the first step in taking a company from good to great would be to set a new direction, a new vision and strategy for the company, and then to get people committed and aligned behind that new direction.  We found something quite the opposite.  The executives who ignited the transformations…first got the right people on the bus (and the wrong people off the bus) and then figured out where to drive it.”

Collins found “who” is more important than “what” because:

Collins’ conclusion “great vision without great people is irrelevant” is most clearly understood at the bottom of a huge mountain to climb – who are you going to trust to get you to the top?

3. failure vs. fall-ure – Collins talked about the Iliad (in addition to being a rock climbing fanatic, he’s also a voracious reader, reading 100 books a year!).  He explained that Hector, not Achilles, is his hero of the story because even though Hector lost the battle, he fought with great honor and lost with great nobility.

Collins differentiates between failure and fall-ure:   failure is letting go, giving up, not trying hard enough; fall-ure is battling with everything you have and still falling.  In rock climbing, as in business, you can always walk away from a fall feeling good about it if you’ve fought your best fight.

(If you want to learn more from Collins’ unique perspective as a rock climber and business guru, check out Hitting the Wall: Realizing that Vertical Limits Aren’t — an inspiring and insightful piece he wrote back in 2003.)

Collins’ insights flesh out my understanding of great rock climbing and great business.  I’ve always been driven by goals and so rock-climbing – and my career and consulting practice — have been about making it to the top.   I’m glad for the reminder that getting to the top matters, but how you climb matters too.