Today I break with my usual Brand Book Bites format of author interview and book overview to share about the book Shoe Dog:  A Memoir by the Creator of Nike by Phil Knight.  This wonderful book combines corporate memoir (Knight recounts some of the most significant moments in the early years of Nike’s founding) with personal confessional (Knight reveals with surprising candor his fears, vulnerabilities, and mistakes).  I suggest you read Bill Gates’ write-up about the book which perfectly captures its essence.  And while I agree with Gates’ assessment that it doesn’t seem Knight set out to teach the reader anything, I do think it conveys some important lessons and observations about starting a business and building a brand — and that is what I want to share here.  So here a just a few of the gems of wisdom that I gleaned from Shoe Dog: 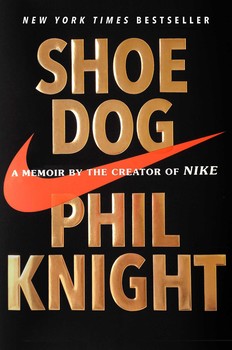 Running a business is — or should be — like running itself.  I’ve found that too many people operate their businesses as if it were only a means to an end — making lots of money, selling lots of stuff, being “successful.”  All of that can be true, but it also seems that running a business can be an end unto itself.  The motivation can, or as Knight seems to suggest, must come from within yourself.

In writing about his idea to start a running shoe company, Knight observed, “Few ideas are as crazy as my favorite thing, running. It’s hard. It’s painful. It’s risky. The rewards are few and far from guaranteed. When you run around an oval track, or down an empty road, you have no real destination. At least, none that can fully justify the effort. The act itself becomes the destination. It’s not just that there’s no finish line; it’s that you define the finish line. Whatever pleasures or gains you derive from the act of running, you must find them within. It’s all in how you frame it, how you sell it to yourself.”

Believe in what you’re doing — or no one else will.  As an entrepreneur, you must be utterly convinced that what you’re doing is worth doing if you expect anyone else to do so also.  As Knight reflected on why he was so much better at selling shoes than mutual funds, he asked himself, “So why was selling shoes so different? Because, I realized, it wasn’t selling. I believed in running. I believed that if people got out and ran a few miles every day, the world would be a better place, and I believed these shoes were better to run in. People, sensing my belief, wanted some of that belief for themselves. Belief, I decided. Belief is irresistible.”

Managing inventory, not marketing, is the key to your viability.  A wise colleague of mine Jeff Harbaugh often writes in his MarketWatch column for the action sports industry about how managing inventory is more important than marketing these days.  It’s a concept that many brand-builders bristle at, but even Knight, perhaps one of the greatest brand-builders of our time, believes it.  He wrote, “Supply and demand is always the root problem in business. It’s been true since Phoenician traders raced to bring Rome the coveted purple dye that colored the clothing of royals and rich people; there was never enough purple to go around. It’s hard enough to invent and manufacture and market a product, but then the logistics, the mechanics, the hydraulics of getting it to the people who want it, when they want it—this is how companies die, how ulcers are born.”

Your brand should characterize your culture, and vice versa.  In my book, What Great Brands Do, I explain that Great Brands Start Inside — meaning, great brands start brand-building by cultivating a strong brand-led culture inside their organizations.  Nike’s story supports and explains this notion that brand and culture are inextricably linked.

When Knight was trying to convince an attorney, Rob Strasser, to join the company after having represented it in a lawsuit, Knight said to him, “You’re one of us.”  “One of us,” Knight wrote, “[Strasser] knew what those words meant. We were the kind of people who simply couldn’t put up with corporate nonsense. We were the kind of people who wanted our work to be play. But meaningful play. We were trying to slay Goliath, and though Strasser was bigger than two Goliaths, at heart he was an utter David. We were trying to create a brand, I said, but also a culture. We were fighting against conformity, against boringness, against drudgery. More than a product, we were trying to sell an idea—a spirit.”

Be clear on the #1 thing you must do.  “Pay Nissho first.”  Knight wrote that this mantra was “my morning chant, my nightly prayer, my number one priority.”  Knight explained that he had concluded that paying his secondary bank, Nissho, was the #1 thing he and his company had to do every month in order to keep their line of credit at their primary bank secure — and they had to do that in order to have the cash to run the business.  Having that clarity kept the company alive.  Every leader needs to have such clarity.

Business is a noble cause.  Knight said it all:  “It seems wrong to call it ‘business.’ It seems wrong to throw all those hectic days and sleepless nights, all those magnificent triumphs and desperate struggles, under that bland, generic banner: business. What we were doing felt like so much more…We wanted, as all great businesses do, to create, to contribute, and we dared to say so aloud. When you make something, when you improve something, when you deliver something, when you add some new thing or service to the lives of strangers, making them happier, or healthier, or safer, or better, and when you do it all crisply and efficiently, smartly, the way everything should be done but so seldom is—you’re participating more fully in the whole grand human drama. More than simply alive, you’re helping others to live more fully, and if that’s business, all right, call me a businessman. Maybe it will grow on me.”