Before we quickly toss aside 2008 with the carelessness due a former lover, I thought it might be enlightening to look back on the predictions that were made at this time last year — you know, those lists of trends that were predicted to shape the marketing experience in 2008.

For my final post of the year, let’s look into whether any of them ended up being right.  From the multitude of predictions that were made last December, I’ve decided to focus on the top 10 “Trends to Watch in 2008” written by Bob Liodice, President and CEO of the ANA, and published in Ad Age magazine.

Let’s have a look, shall we?

on target?  I’d say so!  According to TNS Media Intelligence, overall ad spending dropped 1.7%  for the first nine months of 2008, with a 2% drop in the third quarter alone, despite heavy Olympics and political advertising.  And those declines are likely to only increase when Q4 is factored into the full year recap.  In fact, instead of “a rough patch,” one could say we’ve been on extended bumpy ride.

2.  INNOVATION AND CREATIVITY RULE
“Marketers won’t run away from traditional media — but will leverage technology and new media to accentuate message delivery to consumers and customers.”

on target?  maybe — it’s true, consumers are using social networking sites more than ever, but advertising spending has not kept pace. Despite new social network ad formats launched in 2008, eMarketer has revised its projections for US social network ad spending. It now estimates advertisers will spend $1.2 billion on social networks this year, down from the previous projection of $1.4 billion made in May.

Kraft CEO Irene Rosenfeld is even quoted as saying, “As we continue to look for opportunities for a mass message, TV is one of the cheapest vehicles around.”  So even though marketers may want to be innovative, the almighty dollar is what rules.

3.  GET SERIOUS ABOUT ACCOUNTABILITY
“Recognizing the critical importance of accountability, companies will appoint a czar — the chief accountability officer — to lead a disciplined, internally consistent approach to marketing measurements, metrics and productivity.”

on target?  that would be a ‘no’ — as much as increased accountability may be needed, companies don’t seem to be doing much about it.  According to a recent study by the Conference Board, more than 1/3 of companies report making no efforts to measure marketing return on investment.  Among the remaining companies, which had implemented programs, none have yet achieved their goals in measuring ROI. Only 1/4 report making “good” progress.  Yikes!  While the actual appointment of a Chief Accountability Officer might be an ANA pipe dream, we should be making more progress toward increased marketing accountability.

4.  DIGITAL, DIGITAL, DIGITAL (AND PORTABLE TOO)
“As Steve Ballmer proclaimed at the 2007 ANA Annual Conference, all media ultimately will be created and delivered digitally…The challenge: Are marketers skilled enough to take advantage of this rapidly changing landscape?”

on target?  yes and no — yes, because between the 10,000+ iPhone apps and the credit the deployment of digital media has been given in Barack Obama’s presidential win (see next item below), it’s hard to argue the impact digital had on our lives in 2008; but no, because it doesn’t seem like most marketers have the skills necessary to take advantage of digital media’s full potential.  According to a survey by consultancy Citigate Dewe Rogerson, 40.4% of marketing professionals believe they lack the in-house skills to introduce digital marketing strategies (while CDR’s study was based on marketers UK and Ireland, I’m guessing the findings for the US would be similar).

5.  THE ‘BRAND SWARM’
“Marketers will move decidedly in the direction of DDB CEO Chuck Brymer’s “swarm theory” — the notion that people and their opinions coalesce to form critical forces that massively influence marketplace ideas and concepts.”

on target?  two words for you: Barack Obama

“Compensation models will evolve in 2008. Agencies and clients will work together to create mutually fair value- and incentive-based approaches.”

on target?  not at all — in fact, there’s so little evidence of this having happened in 2008, I couldn’t even find enough material on this subject to make something up.  I did, however, find articles dating back to 1998 stating predictions of imminent changes in agency compensation models.  Perhaps instead of calling “getting compensation right” as a prediction, we should think of it as a New Year’s resolution — we all know what happens to those.

on target?  not yet — BRANDWEEK magazine’s coverage of the new fMRI technology in their 08.25.08 issue does more justice to this topic than I can do here, but the Readers’ Digest version is:

–  “all it needs are companies willing to support [it]”

8.  EMERGENCE OF THE ‘RENAISSANCE MARKETER’
“A new breed of marketing professional is emerging — individuals with a holistic view of the world and extraordinary observational powers. These “renaissance marketers” will be part humanist, part psychologist, part anthropologist and part technologist.”

on target?  no — although we saw some unlikely selections for Chief Marketing Officer appointments this year (recent case in point:  Jill Beraud, former CMO for Victoria’s Secret, named as PepsiCo’s CMO), I’m not seeing a dramatic shift in the experience base of CMOs.  And that’s too bad — C.K. Prahalad, University of Michigan professor and authority of management, explains it best.  With today’s need for innovation, he says, it’s the “unique person you want to look at, not necessarily whether he had this or that experience at P&G.”

on target?   not really — Yahoo! was the biggest mover in this area, announcing just this month they will start making user data anonymous within 90 days, and will destroy all personally-identifiable data within six months, with some exceptions for fraud, security or legal obligations.  And earlier this year  Microsoft was pushing for regulation of the data that online companies collect for marketing purposes. But we really haven’t seen a wholesale push to more or new privacy practices.

ANA may have needed to include this in the years’ predictions to be politically-correct — but the truth is, there really hasn’t been lot of change in marketers’ approach to privacy nor do I expect will there be.  We may not want to admit it, but the benefits of behavioral targeting and personalized marketing are strong enough to outweigh any substantitive change — and we’ve only scratched the surface of what’s possible.

10.  THE POWER OF STRATEGIC ALIGNMENT
“Strategic alignment is one of the most important roles of the chief marketing officer, and In 2008 more CMOs will ensure organizations are strategically aligned.”

on target?  definitely not — according to a study by the ANA, 64% of Chief Marketing Officers and brand managers say their brands do not influence decisions made at their companies (I’ve previously posted on this sad fact).   And in research that I conducted along with one of my partners, Coogan Partners, senior marketers from a range of companies named the lack of alignment between innovation and brand strategy as one of the top impediments to implementing brand strategy.

So CMOs need to work more on alignment.  But there’s hope — I’m hoping for a silver lining in the pressure the tough economy is putting on marketing budgets — perhaps 2009 will be the year marketers actually focus their efforts internally and realize how much more impact they can have through internal brand alignment and integration. 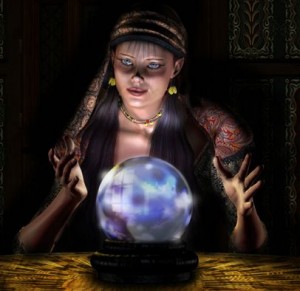 So there you have it — out of the 10 trends predicted, my take is:

Hmmm…it looks like some crystal balls may need a tune-up.  Let’s hope the powers that be have a better grip on what’s in store for 2009.

And with that, I’m signing off for the year.  Thanks for your readership of brand-as-business bites™ this year – I’ve enjoyed feeding our brains together.  See you in January!