(This is the second installment in this series on Google, the flexible brand.  In yesterday’s post, I discussed how Google challenges branding conventions with its logo.) 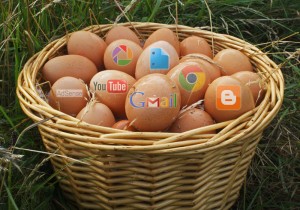 Brand architecture refers to way in which multiple brands within a portfolio are related to each other, and it is usually embodied in the nomenclature and visuals of the brands.   There are four primary brand architecture approaches:

At first glance, Google may seem to be using all of these approaches with the various brands in its portfolio.  Several people have criticized the company for what they consider to be a careless, random approach to naming and representing its brands.

But I did an analysis of how Google uses different branding conventions and there seems to be a method to its madness.   It takes a different approach depending on what the brand is and how the business came into being.

For products and services (which include applications and features), Google seems to use three branding options:

1.  If Google developed the entity in-house, it applies a sub-brand strategy, using Google plus a relatively generic moniker.  Examples:  Google Offers, Google Wallet, Google Street View, and even Google Glass.  This seems to be the most frequently-used approach, which allows Google to strengthen the equity of Google as a master brand, while clearly designating specific offerings.

The company has used slight variations such as Gmail (which is officially branded “Gmail by Google”) and Google+.  I’m unsure of the logic behind these variations but they’ve actually occurred fairly infrequently.

2.  If Google acquired the entity and has assumed operations of it, it applies an endorsed brand strategy, maintaining the original name but incorporating Google as a branding element in some way in order to unify them.  In the case of Picasa, Google’s signature primary color array is incorporated into the graphical icon in the logo.

This approach appears to be an acknowledgement of the existing awareness and equity of the acquired brands.  In fact, Google had originally intended to rename services like Picasa and Blogger to follow the convention of #1 above, but there was such an outrage against the move, that it must have decided to maintain and leverage the strong connections people felt with the original names.  (BTW, this is yet another example of Google’s flexible brand approach – listening to customers and responding thoughtfully.)

3.  If Google acquired the entity and allows it to operate independently, it maintains the original name and uses the Google brand as an endorser.  Examples:  DoubleClick which uses “by Google” in its logo lock-up and most recently Motorola Mobility which is designated as “a Google company.”  This makes sense given the autonomy each entity maintains.  As an endorser brand, Google lends credibility to and suggests a standard of quality for these other brands, but allows each to develop its own identity and customer relationships.

The exception here is YouTube, which is a wholly-owned subsidiary of Google but doesn’t incorporate Google in its brand identity.  Again I’m not sure of the logic here, except perhaps that in Google’s view, YouTube is less a service and more a separate platform, which brings me to Google’s next category of brand architecture.

For business platforms, Google functions as the corporate brand heading up a branded house.

–          For example, although the official name of Chrome the Internet browser is “Google Chrome,” it appears as simply “Chrome.”  Keeping Google in the background makes sense since Chrome has been licensed out to computer manufacturers including Samsung to produce PCs designed specifically for cloud-based computing such as the Samsung Chromebook.  There is also Chrome Experiments, which is a showcase for open-sourced creative web experiments, and Chromium the open source counterpart to Google Chrome and Chromium OS, the open source operating system counterpart to Google Chrome OS.  An explicit tie to Google is not necessary for these new developments, and perhaps may even detract from their appeal and credibility.

–          It uses a similar approach with Android the mobile operating system.  With its open source code and widespread licensing, it doesn’t make sense for Google to be a part of Android’s name or visual identity.

So Google is in fact using all four of the typical brand architecture approaches, but less haphazardly than it might initially seem.  And I wouldn’t be so quick to jump to the conclusion that using multiple strategies is a bad thing.  If exceptions such as those noted above continue to pop up, then there is the risk of confusion and brand dilution – not to mention the missed opportunities to transfer equity between brands.

However, if Google’s approach is intentional and aligned with its business strategies, then the use of multiple brand architectures may actually reflect an enlightened view of brand portfolio management.  After all, brand architecture exists primarily to provide an organizing logic.  Since Google’s business portfolio includes entities of different scopes, objectives, and histories — unlike a product manufacturer that only owns product brands or an automotive brand that only has different models in its portfolio — it may not be possible to represent an organizing logic with a single architecture.

This brings me to my final observation.  It appears that Google’s flexible approach to branding reflects Google’s flexibility as a brand.  My next and last post in this series will discuss this – subscribe to my blog so you don’t miss it.