If you’re like most Americans, you probably never thought about tacos for breakfast (other than tacos from Jack In the Box at 4 am after a night out, right?!)  Well, that’s about to change with the introduction of the Taco Bell Waffle Taco on Thursday.

The Waffle Taco is part of a complete breakfast menu and represents their newest food marketing effort to capture sales at what has been an elusive daypart for the chain. 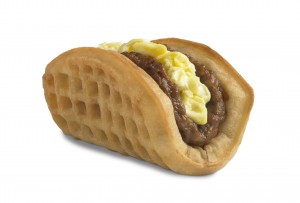 Here are three reasons why I believe this time will be different:

Hey Chicago. Let’s take a break from this winter and kickstart summer. We’ll tell you more at noon on 2/26. #LetsGo

The teasing has paid off – the launch has gotten the attention of big social sharers including Ashton Kutcher and musician Dillon Francis.

Are you sold on the waffle taco? pic.twitter.com/BBJ3Prytp9

I normally don’t make fast food predictions because the industry moves so quickly.  But it seems like Taco bell is doing all the right things to generate trial.  And if it gets the pricing right, and if it executes well — two very important “ifs” — then it will finally have a sustained success at breakfast.