(“brand book bites” are book reviews that highlight the most interesting brand stories in the latest best-selling books.  Subscribe to my feed so you don’t miss these regular bulleted briefings on the books I recommend.)

–  the book:  Can’t Buy Me Like:  How Authentic Customer Connections Drive Superior Results – a salty read about marketing in the “Relationship Era” 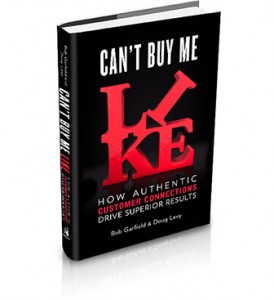 –  the brains:  Bob Garfield  provoked and entertained advertisers for years in his Ad Age column and he continues to the stir the pot now as co-host of NPR’s On the Media.  Doug Levy is the founder and CEO of MEplusYOU (formerly imc2), an agency whose clients include P&G and Coke.  The combination of their perspectives has produced an insightful commentary on today’s marketing landscape with case studies that demonstrate how to create authentic customer relationships.

–  the best bits:  In explaining the transition from the “Consumer Era” of mass marketing to the “Relationship Era” that trades on the currency of consumer trust, loyalty, and pride, the book offers some loaded soundbites:

–   the brand story:  I loved the case study about how P&G brought to life the purpose behind the Secret brand.

The brand’s commitment to “helping women to be more fearless” led it to Lindsey Van, a ski jumper who was banned from participating in an event not sanctioned for women at the 2010 Winter Olympic Games.  Secret took on her cause and produced a video, “Let Her Jump!”, which not only inspired hundreds of thousands of people, but also spiked product sales – and probably played a role in the International Olympic Committee’s decision to include ski jumping for women in the 2014 Winter Games.

When I asked Bob about why he thought the effort was so effective, he said, “It was a cause, a movement — not a campaign.”  He also explained that it represented an important departure from the typical use of celebrities.  “Celebrities are usually hired to endorse a product and viewers can see right through that transaction. But in this case, Secret endorsed the athlete.”

This is a totally different way of thinking about the role of brands in culture.  And it’s the perfect example of what brands must do to thrive in a world where people don’t want to be sold to.

–   the bottom line:  Can’t Buy Me Like convincingly issues a manifesto to marketers: “In the Relationship Era, your every action, and inaction, is advertising.”

(This write-up is part of a Post2Post Virtual Book Tour – check out other write-ups by Renee Hopkins, David Berkowitz, and Jay Ehret.)