the joy of cola 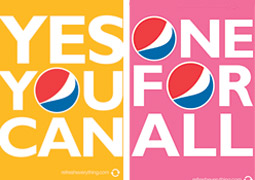 — most of it negative — so I wanted to offer a different point of view.

Before I get to my POV, let me try to summarize why I think most people have a problem with the campaign.  Critics say the effort is commercializing the positive movement Obama has created, and its use of a graphic that looks remarkably similar to visuals from the Obama campaign and the words “Yes We Can” which are taken directly from Obama are crass rip-offs.  I think people find the campaign particularly offensive because it’s from a cola company, and to try to relate what little a soft drink can do to the perceived huge potential of Obama’s presidency is reaching too far.  (If I’ve failed to accurately capture the campaign criticism, please let me know — I really do want to understand it.)

Here’s my challenge to the criticism.

If I understand Pepsi’s objectives correctly, they are trying to facilitate people’s involvement in Obama’s movement to change (improve) the nation.  This doesn’t seem to be different from any other social responsibility effort we’ve seen from other companies — companies try to associate their brands with the positive, complementary attributes of an organization or cause by supporting it.  The run campaigns to increase its exposure and (hopefully) generate increased consumer participation.  It just so happens Pepsi is doing this with the President’s agenda — and while I don’t mean to suggest that a new administration is the same as a non-profit, I can see why brands would want to promote Obama’s values and goals.

It would be another thing if Pepsi were trying to subversively encroach on Obama’s campaign or make some sort of subliminal connection to the President’s message of change — instead they’re being upfront and clear about their intentions — which, I find, um, refreshing.

It would also be too much if Pepsi were claiming that the brand is doing what Obama is trying to do — but they’re clearly not.  The campaign simply promotes the sharing of ideas and positive spirit toward a common goal of “refreshing the nation.”

i also find the Pepsi effort more substantive than, say, Ikea’s decorate-the-oval-office campaign — that seems like the equivalent of putting a celebrity in an ad just to generate some buzz.

You can read another perspective on why “nothing wrong with spreading the joy of cola” by Bob Garfield, Ad Age‘s resident critic  — you can read his POV here.

P.S.  Just a reminder — my FREE webinar, “Get Your Brand Ducks in a Row: How To Achieve Brand Alignment with a Brand Toolbox” is this Thursday, January 29th 9:00-9:30am PT / 12:00-12:30noon ET — read more about this learning opportunity here — and please register at deniseleeyohn.com/webinar .