When will marketers learn that eyeballs aren’t worth more than integrity?!  Brand managers and advertising agencies continue to run irresponsible ads and do outrageous acts in an effort to draw attention to themselves.  At best they might get some short-lived PR but more likely they end up just wasting their money — and damaging their brand in the process.  It’s time to stop the stunt marketing.

First, Burger King ran ads in which the phrase “OK, Google, what is the Whopper burger?” triggered  Google Home devices within earshot to tell listeners about BK”s signature burger.  Not only did the spots backfire when Google Homes began citing the Whopper’s Wikipedia entry that people had edited to disparage the product (mentioning ingredients such as “toenail clippings” and “rat”), but also they annoyed people who didn’t want their voice assistants triggered without their intent.  Within three hours of the ad’s airing, Google intervened and stopped its Home from responding to the commercials — not quite the campaign Burger King had planned.

Carl’s Jr. recently wasted a bunch of money on a campaign in which it tweeted messages to Amazon once an hour for 24 hours in an alleged attempt get the e-commerce titan to buy the company.  The tweets ranged from the meaningless (e.g., ” You like shipping boxes, we like filling them with food. Our logo smiles, your logo smiles!!!) to the ridiculous (e.g., “Cloud-Based Restaurant” A first in food. How’s it work? Thats where you come in @Amazon”.)  The campaign might have generated coverage in the business media but it doesn’t seem to have generated more traffic or sales for the chain — and given its tone and manner, it couldn’t have impacted Amazon’s interest in the company as a serious acquisition target. 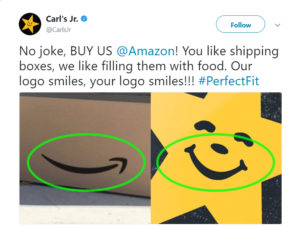 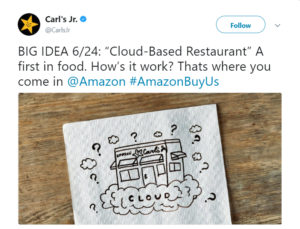 On the same day, Pizza Hut introduced the Pizza Hut Parka, a jacket made out of the same material as the company’s pizza-delivery bags.  As brilliant as the product may sound to those who are preparing to brave frigid temperatures this winter, it’s just a marketing gimmick.  The parka is not actually for sale.  Instead, customers are entered in a random drawing to win one.  And given how garishly branded the parka is, it’s not likely that anyone would want to wear it even if they won one.  So it’s unclear what purpose the parka serves other than to clog up social media ad channels at a time when the chain really needs to establish meaningful and sustainable competitive differentiation.

And even a brand that should know better seems to have caught the stunt marketing bug. The latest new product from Starbucks is the Halloween-themed Zombie Frappuccino.  Made with green caramel apple powder, pink powder, pink whipped cream and a “pink mocha drizzle,” the Zombie Frappuccino follows on the heels of the Unicorn and Mermaid fraps that Starbucks offered earlier in the year.  While these limited-time only products may be Instagram-worthy, they’re not in line with the soul- and stomach-nourishing essence of the Starbucks brand.  And the campaign reeks of desperation for attention from a brand that should act in a more refined and dignified manner.

The Stupidity of Stunt Marketing

Given the dismal state of most fast food brands these days, the need to do something dramatic is understandable.  Jeff Jenkins, Chief Marketing Officer, Carl’s Jr. and Hardee’s, explained his company’s desperation saying “We’ve got to be impossible to ignore.”  But surely there are better, brand-building ways to attract attention.  Taco Bell’s recent introduction of a clothing line at Forever 21 provides an example of how to generate buzz and  help your brand become more iconic in a way that authentically capitalizes on — and increases — customers’ love of the brand.

Stunt marketing isn’t just a waste of money — it’s unnecessary. With all the emphasis on brand value and the power of data in business today, you’d think these marketers would be smarter and more strategic about their efforts.  But it seems, for now, stupid stunts are easier.