How to Build A Strong Corporate Reputation

Having an excellent corporate reputation prompts customers to buy your products, investors to value your company more highly, employees to be more productive, and other stakeholders to recommend and support you.   How?  Three companies show how to establish and maintain a strong corporate reputation. 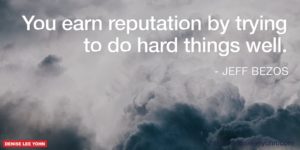 You might know about the lawsuits that have been filed and judgments that have been awarded against Johnson & Johnson for the toxic effects of its talcum powder.  It’s no surprise that general consumer sentiment about J&J has dramatically declined since the issues have come to light.  But J&J’s other product brands, Band-aid and Tylenol, have not experienced a drop in perceptions.  And the company was recently named #17 on the list of Fortune Magazine’s Most Admired Companies, which is based on perceptions among executives, directors, and analysts about the quality of the company’s management, its social responsibility to the community and the environment, and the quality of its products or services, among other factors.

J&J has managed to retain such esteem has built up a reservoir of goodwill and trust for over 120 years.  It started when it launched its baby and maternity business in 1894, which helped it form positive emotional associations with the public. Then in 1943, it crafted what it calls “Our Credo” which describes the company’s core values.  The Credo starts off “We believe our first responsibility is to the doctors, nurses and patients, to mothers and fathers and all others who use our products and services” and J&J’s commitment to it is is considered the gold standard among many business leaders.  During the Tylenol crisis in the 80’s when seven people died, J&J managed the situation so well that it is credited with changing not only how over-the-counter medicine is sold but saving the company from a damaging blow to its brand.  So over the years, people have come to trust J&J and it appears that trust is sustaining it through this latest situation.

J&J demonstrates the importance of acting consistently and building trust proactively so that you have a strong foundation to support you when your corporate reputation is threatened.

Samsung has experienced a lot of problems in the last year:  First its Galaxy phones were exploding, then its washing machines had to be recalled, and last month, its CEO was sentenced to jail for his involvement in a government bribery scandal.  But amazingly through this period, Samsung’s profitability hasn’t suffered — in fact, it’s increased. And it remains the share leader of the global smartphone market and its share is poised to rise even higher.

Samsung has managed to thrive against the odds because it has a proven track record of innovating terrific products.  Also it responded to the exploding phone issue thoroughly by issuing a complete recall including free returns and exchanges and removing all of the problem products off the shelf.  And it has effectively isolated the problems its CEO has faced from its products by continuing to introduce innovative breakthrough new products like the Galaxy 8 which has generated stellar reviews and by running its component business skillfully.

From Samsung, we learn that innovation and solid management can counteract or even offset the negative effects of crisis and scandal, so you retain an overall positive corporate reputation.

The last example contrasts 2 companies:  KraftHeinz and Unilever.  Earlier this year, KraftHeinz’s $143 billion attempt to take over Unilever was squashed.  It was a huge loss for Kraft and its owners who were looking for fast ways to grow — but a major victory for Unilever whose value surged after the deal fell through.

Kraft failed in part because it lost public trust after the way it handled its takeover of Cadbury.  It reversed many of the promises it had made when it initiated the hostile takeover – it closed factories and laid off thousands of workers, it took cost out of its product recipes which changed the taste of its beloved chocolate, and it spun off its snack businesses, basically signaling that it didn’t value the Cadbury brand which was so important to the public and the U.K. market in general.

Meanwhile, Unilever has been building a clear, compelling brand position with its Sustainable Living Plan.  Its efforts included improving product formulations to be more sustainable, reducing the impact its operations have on the environment, and introducing social programs like encouraging hand washing in developing countries in order to prevent the spread of disease.

So when KrafthHeinz decided to try to takeover Unilever, Unilever was able to rally enough support to show KraftHeinz investors they wouldn’t be successful.  Unilever shows the tremendous power of a corporate reputation fueled by a clear, compelling brand position.

Lead the Way to a Great Corporate Reputation

As a leader, you should implement the lessons from these examples in your strategies and operations.  In addition, you can build a strong corporate reputation by: