how to succeed in small business

Jason Fried, CEO of 37signals, knows a thing or two about small business.  His company has been developing apps for small businesses for seven years.  But it’s how he runs his own company that reveals his keen insight for how to be a successful small business.

I had the pleasure of hearing Jason talk as part of a Chicago Ideas Week lab (I was in the Second City for a speaking engagement and wanted to participate in what was billed as an “ecosystem of innovation, exploration, and intellectual recreation.”)  For nearly two hours, Jason generously took questions from our group of 30, riffing on topics ranging from his book REWORK to his personal background to Chicago’s tech scene. 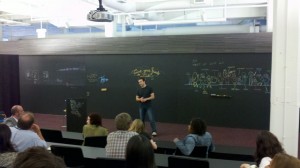 What stood out the most to me were his thoughtful and enlightened perspectives on running a small business.  So with many thanks to Jason, here’s his list of advice for entrepreneurs:

1. Grow as slowly as you can – It seems counterintuitive that slowing down actually fuels growth, but Jason explained that growing slowly allows you to make sure you have the right people.  “When you expand quickly, it’s very difficult to maintain culture.  That’s the problem with a lot of start-ups that are VC-backed and have a lot of funding:  the money is used to hire people.  And if you hire too quickly and you’re not careful about who you hire, you end up in a situation where people aren’t acclimated because there’s too many people too fast.”

Moreover, growing slowly allows you to personally foster your culture.  Jason explained, “You’re going to have influence on each person you hire. And let’s say you hire 10 people a month, you’re only going to have 10% influence on each individual person.  If you only hire one or two people a month, you can spend a lot of time with those people and get them to understand what you’re trying to do and then they in turn can spread the culture. But if everyone’s only getting a tiny bit of culture, they can’t spread that – they have to hang on to that, there’s not enough to go around.  So that’s one of the advantages of hiring slowly.”

2. Hire carefully – A corollary to the first principle is to hire slowly.  Be selective; hire for culture fit as much as for skills and experience; and evaluate real work during the selection process.

“We don’t look at resumes,” Jason explained.  “I don’t really care what someone says they did somewhere else because it’s very hard to verify that stuff.  We give people actual work to do for us and we pay them for it.  For example, when we’re hiring a designer, we’ll give them a project to do, it takes them one week, we give them $1500, and we say, ‘Here’s a problem, how would you solve it?’  If it’s a programmer, we usually look at their open source contributions.  For customer service people, we have them write sample responses.”  That way, you get to evaluate what they actually can do vs. what they say they can.

3. Drive culture by example – Further on culture…I’ve previously written that culture is one of a business leader’s most important responsibilities.  Jason talked about his approach: “You need to lead by example. Culture isn’t something that you create through words.  It’s all about actions, about consistent actions.  It doesn’t really matter what you say the culture is — it’s about how you live, how you work together, how you treat people.”

4. Motivate people with the work – Different people are motivated by different things – for some, it’s the money; for others, it’s the variety of projects; for others, it’s the ability to impact something substantially.    As Jason explained,   “You just have to try to get to know everybody and then put them on the types of things that motivate them.”  But he added, “At the end of the day, you have to motivate people by giving them interesting things to do and work on products they believe in.”

5. Have a point of view – When asked about how he’s developed and promoted 37Signals’ uniqueness, Jason answered, “I don’t think enough companies have a point a view that’s obvious.  Mostly because they’re afraid or they let lawyers determine what the company is, how they speak, what they do, how they act — that’s going to dilute any sort of edge.”

6. Don’t think about marketing – Jason got the Lab attendees’ attention early on when he stated not to waste money on PR.  Later he went even further when he discouraged people from developing elaborate marketing plans.

7. Solve real problems – “Simple tools that people use” is how Jason described 37Signals’ product strategy.  But usefulness isn’t just an attribute of its products – it’s one of the core values of the company.

Jason recommended entrepreneurs focus on “solving a real problem, not an imaginary problem.”   “Everything is a problem,” he explained, but you should ask yourself, “Is it a real problem that people are going to pay for, that advertisers are going to want to deal with?  Is this thing worth paying for or am I just making something cool (which is OK if you know that’s what you’re dealing with.)”  Ultimately, usefulness is the litmus test for whether you have a business, or just a hobby.

8. Be a good editor — A stumbling block for many tech start-ups, Jason believes, is wasting time on things that don’t really matter.

“You’ve got to know what not to waste time on.  Raising money is a good example.  A lot of entrepreneurs spend a lot of time raising money when they don’t really need to. [There are a lot of things] people put a lot of energy and time into when they should be focused purely on their product – making it really damn good and working with really great people, caring about the people you work with and the people you want to hire, the people you want to surround yourself with.  You’ve just got to figure out what’s really important…You can spend a lot of time on stuff that’s cool to have but not central to have and then you miss the essential stuff but the cool stuff doesn’t matter.  It’s a matter of being a really good editor.”

9. Put yourself on the line – If you have the opportunity to actually build a product vs. only provide services, do it, recommends Jason.  He explained that people who only give advice to other people don’t ever have responsibility for what actually gets done.  (Yes, I realize he’s talking about people like me!)  By actually making a product, he says, “You get to see whether your ideas are any good.”  Putting yourself out there is risky, but it’s the only way to know the truth.

10. Think principles, not plans – This list of principles ends with a principle about principles because that’s how Jason responded when he was asked about what the future holds for 37Signals.  He referenced a quote about the problem with goals which says that goals are limiting because they’re made for the person you are when you set them, not the person you’re going to be.  He also realizes he wants to be able to consider new ideas as they arise – he doesn’t want them to be stuck on an inflexible path.  So, he explained, he doesn’t spend too much time thinking about the future because having guiding principles is more useful than specific plans.

Although this advice speaks to leaders of small businesses, it’s clear Jason and his colleagues don’t intend for 37 Signals to stay small forever.  Growing the company’s business, as well as its influence on the industry and people’s lives in general, is very much their ambition.  Based on what Jason shared, I have every confidence – and even more hope – they will succeed.