when computer science and neuroscience intersect

The potential that lies at the intersection of computer science and neuroscience is outlined in a new, quite literally mind-blowing book, The Two-Second Advantage: How We Succeed by Anticipating the Future—Just Enough by Vivek Ranadivé and Kevin Maney.  It’s my pleasure to introduce this work to you in this the first post of the book’s Post2Post Virtual Book Tour.* 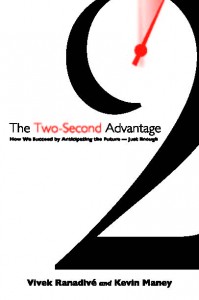 The premise of The Two-Second Advantage is that too much data is overwhelming computing’s capabilities, but an alternative is emerging:  event-driven systems that form models by analyzing massive amounts of data but don’t rely on accessing that data all the time.  Borrowing from the way the human brain works, these systems are predictive – they take in real-time events, predict what’s about to happen, and take action or send a notification without human intervention.  They operate on the idea that a little bit of the right information ahead of time is more valuable than piles of information too late.

The impacts of such systems are as far ranging as the economy, counter-terrorism, global health, sports, and personal technology like Netflix, travel, social life, and personal health care.  As an indication of the interest in the topic, the book hit the New York Times bestseller list only a couple of weeks after its launch.

The book is quite heady (pardon the pun) but it piqued my curiosity primarily in regards to the organizational issues these new systems raise and their implications on brand-building.  I posed the following questions to one of the authors, Kevin Maney:

Q:  It’s clear predictive analytics can make companies more efficient — how can a company use them as a platform for brand differentiation and competitive positioning that increases brand consideration and equity – i.e., what’s the customer value proposition?  how should companies position these capabilities to customers?  how transparent should they be?

A:  In the book we tell the Caesars Entertainment story. Caesars, which used to be called Harrahs, issued a rewards card to its customers, then used analytics to build models of customer behavior in general and individual customers in particular. So the casinos came to know what might trigger a good customer to stop gambling and leave. By using the technology to predict that a customer is about to hit that trigger, a floor manager can stop by with an offer of, say, a discounted buffet meal. Customers start to feel that Caesars’ casinos know and understand them. Other casinos might draw people with glitz. Caesars does it with knowledge and service.

But it’s important to be transparent. If you know too much about customers and they don’t understand why, they may get spooked. A little honesty wins a lot of leeway from customers.

Q: You indicate adoption of predictive technology is dependent upon cultural changes as much as it is on improvements to quality and lowering of costs – e.g., folks at the Federal Reserve needed to cede to machines what appeared to be the Fed’s main function (setting interest rates) so that they could focus on its original charter, and the New Jersey East Orange police department needed to change its measure of success from the number of criminals it catches to the absence of crime.  What suggestions do you have on how leaders facilitate those cultural changes?  How do they convince employees they’re not being replaced by machines?  How do they teach people the appropriate ways to use the analyses?

A:  The East Orange police department is an interesting case study. I spent quite a bit of time there and talked to a number of regular police officers, some who had been on the force for decades. They all told me that when Jose Cordero, the police director, first pushed predictive technology on the force, they all pushed back. They thought computers might replace them, or that the method wouldn’t work, or that it would force them to re-learn policing, and so on. But a few years into it, most of the officers loved the new system. It didn’t replace them — instead it made them far more effective. Their jobs became more satisfying.

A lesson from East Orange, though, is that a lot of these programs need to be led from the top. Sometimes technology bubbles up from the bottom — that was the story of the personal computer revolution, and now smart phones. But to be effective, predictive technology has to go hand in hand with cultural change. Caesars Entertainment discovered that. So did the U.S. Customs and Immigration Service. And East Orange.

Q:  How does your research about how the brain works and develops relate to the way organizations work and develop?  Many companies talk about being learning organizations – what principles and practices from the talented brain might be applied to help them do so?

A:  As we describe in the book, a significant part of talent is predictiveness. Talented people can predict what’s about to happen just a little bit faster and better than everyone else. We’re talking just fractions of seconds, many times, but that’s enough to get a competitive advantage. If, as a company, you know what a customer is about to do, you can take action to make sure that customer ends up being happy.

Predictiveness isn’t about analysis and database diving. It’s about creating instinct — watching data in real time, and instantly knowing what it means and what to do, like a Wayne Gretzky in hockey. Organizations can become predictive and talented just as humans can. That’s where business is heading — toward creating “talented” organizations.

Q:  You outline many examples of how companies can use predictive technology to become more efficient companies that serve customers better – any thoughts on how shoppers can (will) use it to become better customers?

A:  Like most technology in history, predictive computing might start out being difficult and expensive and something only enterprises can do — but then before we know it, it will be a mobile device app. Consumers are going to have predictive apps that can get ahead of fashion trends, traffic, mortgage rates — you name it. The technology is going to eventually empower everyone, not just big companies.

For the rest of this week, other bloggers will feature tour articles on The Two-Second Advantage.  I encourage you to check out the schedule and look into the other articles.

*Post2Post Virtual Book Tours — web-based book tours where great authors and their books are connected with great blogs and readers — are produced by good-guy Paul Williams of Idea Sandbox.