How I Did It:  Choosing a Book Title

Writing a book can be tedious and grueling at times.  Having written three books, I can attest that organizing all those ideas in your head and then conveying them in written word, 60,000+ words actually, is not for the faint of heart.  But one of the hardest parts of writing a book is choosing a book title. 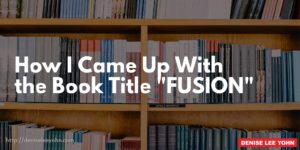 A book title has to be differentiating, descriptive or at least evocative, pithy, memorable, and available (in some form) as a URL — all the same criteria of a brand name.  And if you’ve ever had to create a brand name, you know how hard that is.

I feel blessed that the title of my first book, What Great Brands Do, came so easily to me.  Once I had pivoted from the perspective of writing the book that I wanted to write to writing one that people would want to read, the name came intuitively.  It seems people have always wanted to know what great brands like Apple, Nike, and Starbucks do, so What Great Brands Do made perfect sense.

Choosing a book title for my second hardcover, traditionally-published book, FUSION: How Integrating Brand and Culture Powers the World’s Greatest Companies, was much more difficult.  It had been fairly easy to develop the main thesis and outline of the book because I felt so passionately about the topic and I had done so much research on it.  But I struggled with the right representation of the core idea:  brand + culture = results.

I embarked on my book title journey by engaging a “book whisperer,” Josh Bernoff, and enrolling the help of my dear friend and colleague, Steve Morris.  We traded several emails and spent hours on a Google Hangout working through ideas.  I’m grateful to them both.

When we started, I told them I had only one key requirement for the title:  It could not use the word “brand” in the main title.  I thought using “brand” in the lead would give the impression that the book is about branding or brand-building, and it’s not.  It’s about culture-building, organizational development, and leadership.  Other than that, my mind was open — too open perhaps.

We explored several general directions.  First, we explored names like What Great Brands Do, which had been described by some as “Jim Collins-esque” (I took this as the highest compliment).  I looked at Collins’s book titles and considered names like Bound to Thrive, Bound to Last, How the Good Become Great, etc.  Eventually, though, we decided I didn’t want a title that seemed so derivative.

We also tried titles with call-to-action words such as “future-proof,” “engineer,” “build,” etc., but always ended up needing to add such long phrases after the call to action that this direction didn’t seem viable.  At one point, I thought I had come up with the best title ever, Inside Out, until Josh pointed out that a movie by that same name had been released recently.

We considered how a metaphor of two elements coming together might apply.  We discussed a two-key lock, a peanut butter cup, two strands of DNA, yin & yang, offense & defense, etc.  And in an effort to mimic the popularity of one-word restaurant names, we also considered one-word titles:  Mashup, Seed, Nexus, Both, Bonded…

Finally it was a combination of these two directions that led to FUSION.   FUSION drew upon on the metaphor of joining two atomic nuclei to create power (I actually had to ask my scientist-husband to explain how this worked) and it was a single punchy, and hopefully, provocative word.  The remainder of the title, How Integrating Brand and Culture Powers the World’s Greatest Companies, flowed quite naturally after Steve reminded me that “greatness” was the standard that I had called people to with my first book.

So…that’s my story of choosing a book title.  I know every author’s process is different but hopefully this was interesting to you.  Check out this short video from my keynote presentation, “The FUSION Formula: Brand + Culture = Results,” for a bit more on why FUSION fits: 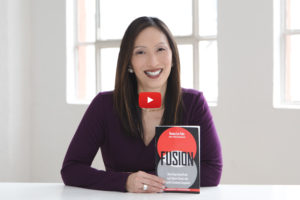 P.S. I’m considering writing other “How I Did It” posts — let me know what topics you’d like to learn.