history of marketing, part one

A couple of weeks ago I wrote a blog post, Future of Marketing, which recapped the themes, tools, and tactics that 60 marketing experts expect will shape the future.  Given the interest the piece raised, I thought it might be equally interesting to review the history of marketing.  After all there’s a reason why philosopher and poet George Santayana’s quote, “Those who cannot remember the past are condemned to repeat it,” resonates.  History is full of great lessons.

As my source for the history of marketing, I turned to a culturomics project which recently made headlines (culturomics is the application of high-throughput data collection and analysis to the study of human culture.)

Back in December, the folks at the Cultural Observatory at Harvard, Encyclopaedia Britannica, the American Heritage Dictionary, and Google launched the world’s first real-time culturomic browser on Google Labs. It uses a corpus of over 5MM digitized texts containing about 4% of all books ever printed.

A detailed explanation of the undertaking, along with an explanation of the methods of validation, an acknowledgment of its limitations, instructions on proper interpretation, and usage ideas, can be found at http://www.culturomics.org and in a dense but enlightening paper in Science magazine.

Ultimately my research led me to The Google Labs N-gram Viewer through which I produced a graph showing the frequency of “marketing” appearing in English books between 1800-2000.  On that timeline, I plotted some of the more significant events in general U.S. and business history and then looked into the books which were included in the search. 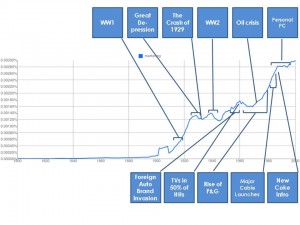 I recognize the limitations of my approach, not the least of which is that the database is comprised of books only and excludes content from magazines, newspapers, and motion-media which would probably represent a much more accurate view of marketing.  But even so, I believe the results are as telling as are the insights from my Future of Marketing analysis.

Here’s Part 1 of what I found (Part 2 will be published next week):

The concept of marketing was virtually absent from books until the early 1900’s. “Marketing” finally did show up in texts with titles like Marketing: Its Problems and Methods, Principles of Marketing, and Marketing: Methods and Policies.

The last of these, Marketing: Methods and Policies published in 1921, provides a quite entertaining read as it seeks to explain what marketing is:

“There are three different kinds of things that must be considered by everyone who has anything to sell.  One group of considerations has to do only with personal salesmanship and sales management. Another has to only with advertising.  Still a third is concerned solely neither with personal salesmanship nor with advertising, but is common to both…

“The plan behind the campaign is the thing that primarily determines the success or failure of every salesman and of every advertisement.  On it depends the selection of advertising or personal salesmanship as a marketing tool; on it depends also the choice of one trade channel or of another and the decision to use established methods of reaching the market or to hew out some new road between distributor and consumer…There is no name in general use to indicate those activities that are included in the complete campaign…the word “marketing” is gradually coming into popular use to apply generally to the distributing campaign…Marketing methods, in a sense, are inclusive of everything that is done to influence sales.” (emphasis mine)

Marketing seemed to flat line between 1930 and 1970, with very little change in the frequency of its appearance in books.

Then in the 1970’s marketing took off, nearly doubling in frequency in 10 short years.  Books which brought an analytical approach to marketing appeared, as evidenced by titles such as Marketing: An Integrated Analytical Approach.

In 1972 Philip Kotler wrote Marketing Management, long considered to be the bible on modern day marketing.  In it, Kotler legitimized and standardized marketing by synthesizing ideas from economics, behavioral science, organizational science and mathematics.

He argued that companies ought to be driven by customers and markets, rather than by the intuition of marketing executives, saying:

“Marketing is the science and art of exploring, creating, and delivering value to satisfy the needs of a target market at a profit. Marketing identifies unfulfilled needs and desires. It defines, measures and quantifies the size of the identified market and the profit potential. It pinpoints which segments the company is capable of serving best and it designs and promotes the appropriate products and services.” (emphasis mine)

(BTW, Kotler continues to enlighten us – the 14th edition of Marketing Management was just released.)

Also International Marketing and similar texts reflected the influence of globalization in business which occurred in the 70’s.

After another, albeit shorter, period of stalled growth, the mid-1990’s showed renewed interest in marketing.  Actually, it wasn’t so much in interest as it was insurrection.  Books seemed to focus on calling out the misuse or misunderstanding of marketing which must have occurred in the interim.  Three seminal texts (all of which grace my bookshelf) were published at this time:

1.  The 22 Immutable Laws of Marketing: Violate Them at Your Own Risk by Al Ries and Jack Trout (1994).  In this instructive text, the authors took on marketing:

“Billions of dollars have been wasted on marketing programs that couldn’t possibly work, no matter how clever or brilliant.  Or how big the budgets…As far as we can tell, almost no one is willing to admit that there are any laws of marketing – certainly none that are immutable…We have been studying what works in marketing and what doesn’t for more than 25 years.  What we have found is that programs that work are almost always in tune with some fundamental force in the marketplace.”  (emphasis mine)

2.  In 1991 Kevin J. Clancy and Robert S. Shulman wrote The Marketing Revolution:  A Radical Manifesto for Dominating the Marketplace.  In similar fashion to Kotler, these authors condemned the marketing practices of their day, saying:

“The marketing revolution is coming because failure is self-evident and everybody…is angry because marketing, which should be driving business and marketing, doesn’t work.

“…Many company managers in their deepest hearts regard production or finance as the secret to success. Too many still regard marketing as an adjunct to sales.  And even within companies serious about marketing, executives disagree over basic methodologies.” (emphasis mine)

Clancy and Shulman predicted a marketing revolution that would “transform American business in the 1990s as top managements comprehend marketing’s significance to their companies’ future and drive this new thinking through their companies.”

3.  In the same year, Managing Brand Equity was written by David A. Aaker.  He explained the need for his book:

“Brand equity is one of the hottest topics in management today…Yet research shows that managers cannot identify with confidence their brand associations, levels of consumer awareness, or degree of customer loyalty.  Moreover in the last decade, managers desperate for short-term financial results have often unwittingly damaged their brands through price promotions and unwise brand extensions.” (emphasis mine)

These three texts – and others like them which were published in the same time period — were similar not only in their disdain for the marketing practice of their time, but also for the case study and analytical approach of the content.  By the time of their writing, the authors had years of good and bad stories and mounds of data to draw upon to make their points and call for a new understanding and practice of marketing.

Most recently, marketing has evolved even further. Check back next week for the History of Marketing Part 2 which outlines what the books of the most recent decade say about marketing today – and concludes with some overall observations about the history of marketing.