What do Justin Bieber and Donald Trump have in common? Besides mops of hair! Both guys (we can’t really call 17 year-old Bieber a man yet) are driving major brand extensions – they’re own. 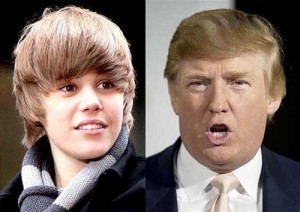 The Donald’s brand may have started in real estate, with office buildings and hotels littering several metropolitan areas. But the Trump name now appears on vodka, health products, mattresses, furniture, cuff links, shirts, ties, and even a seminar company. Trump’s most recent extension pursuit is golf courses, as he is building a billion dollar golf course in Scotland to add to the nine golf properties he already owns.

Justin Bieber’s aspirations seem to be just as ambitious. He’s released his own line of headphones, nail polish, and even scented dog tags (no, I’m not making this up.) Current rumors suggest he is planning to launch his own retail store as well as a line of Snack Pak pudding cups.

On one level you could lump Trump’s and Bieber’s brand extension pursuits together and chalk them up as the sort of hubris and greed that seems to come with celebrity territory. They are simply joining the ranks of others stars who have built business empires by trading off of their names.

But there are important insights to be learned from them about brand extensions. Actually it’s the differences between the two guys’ approaches that is most revealing:

Motivations — Trump seems to be pursuing brand extensions as an exploitation of his brand, while Bieber’s moves seem to more of an expression of his.

In a BusinessWeek article, Trump explains the success of his endeavors saying, “[My] name is hotter than ever…it’s been hot as a pistol.” The piece reports, “After taking a break to greet Kate Gosselin, star of the onetime reality show Jon & Kate Plus 8, Trump says: ‘If Trump wasn’t doing well, the stars don’t come up and kiss my ass.’” Trump clearly recognizes the value of his name and he’s using it as leverage for business deals.

Bieber, on the other hand, seems to view extensions as an expression of himself. In a video introducing his new headphones, he explains their purple color saying, “It’s my favorite color. I just think it represents me the best.” And the colors of his nail polish collection are reportedly inspired by his songs: Me + Blue is dark blue and One Less Lonely Girl is a girly lavender.

Guardrails – The primary judgment call of any brand extension is whether or not the new product or category is appropriate for the brand. Effective brand managers apply guardrails to delineate what is appropriate and what is not.

In Trump’s case, the guardrail he applies is brand-based. In a 2006 blog post, he wrote: “I’ve worked hard to make sure the Trump name is found only on buildings of the highest caliber and products of the finest quality. I won’t even consider giving my approval to anything unless I know it’s the top of the line because when people see or hear Trump, they expect the best.” To Trump, the quality his brand is associated with is the primary guardrail within which an extension must lie.

Bieber’s guardrail is fan-based. His statement in an interview with Rolling Stone magazine — “I don’t think of myself as powerful. If anything, my fans are powerful. It’s all in their hands.” – reads like an overall philosophy as well as his approach to brand extensions.

With teen girls and the products they love as his guide, decisions about what is appropriate come easily for him. That’s why it doesn’t seem odd that a male celebrity would develop a female product like nail polish. David Reeder of talent agency Green Light observed in a Brandweek article that Bieber’s extensions “make sense to his core audience, so there’s nothing completely off-brand for him.”

Business relationships – For Trump, brand extensions are a solo endeavor. Most of his deals are acquisitions or development plays. It’s the traditional real estate approach – there is a buyer and a seller, and after the transaction closes, there is a single owner. He may work with another entity to develop a product, as he did with Talbott Teas to create new tea blends or with PVH to create his clothing line, but the end product is always branded Trump.

But Bieber is all about partnerships. It’s an approach he first employed with his career. He started out by taking on Usher as a mentor and released early hits with him and Ludacris. More recently he’s collaborated with musicians like Kanye West. His brand extensions reflect a similar collaborative approach.

The aforementioned headphones were developed in partnership with Monster and Dr. Dre and are branded “Just Beats.”  The nail polish line is a result of a collaboration with Nicole by OPI and is called the One Less Lonely Girl collection.  Bieber is mentioned in promotional materials but his name doesn’t appear on the product.

Bieber’s approach is less conventional and not without downsides. Allowing appropriateness decisions to be driven by your customers vs. the brand has the potential to take your brand off course. And by doing co-brands or partnerships, your brand may derive less value from the extensions. But the Bieber approach may resonate more with your target audience, as it conveys more humility and flexibility.

I love how brand insights can be derived from a 66 year old business tycoon and a 17 year old pop star alike!

other posts about brand extensions: