– the book:  People First Leadership: How the Best Leaders Use Culture and Emotion to Drive Unprecedented Results 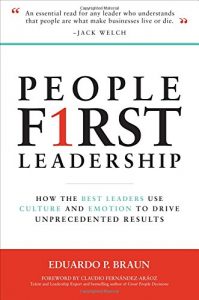 – the brain:  Eduardo Braun.  In his role as the former Director of the World Business Forum, Eduardo has interviewed world leaders such as Bill Clinton, Rudy Giuliani, and Mikhail Gorbachev and business luminaries including Jack Welch, Tom Peters, and Herb Kelleher.  This front-row seat to leadership in action has given Eduardo keen insight into what great leaders do.

– the best bits:  Eduardo starts with an introduction to the role of culture relative to strategy and the importance of culture in driving individual and group success.

“Culture and strategy are not wholly independent variables; they are intimately interrelated.  Culture is an important variable in the strategy implementation process — it affects what people do, how they act, how they compete.”

“…You need both the right strategy and a strong culture.  However, if you recognize that culture can be a unique way of competing, you will discover that culture may in fact be the essence and heart of the strategy!”

The book then introduces the concept of the CEO as the Chief Emotions Officer.

“…It is the duty of a leader to understand that she can control and use certain stimuli to create the appropriate emotions that, in turn, increase performance at work.”

The bulk of the book examines the five roles that make up the job of the Chief Emotions Officer:

Some of the best bits of the book come from the many quotes from leaders that fill the pages.  A few examples:

Bill Clinton, former President of the United States:  “My work as president could best be described as Chief Decision-Making Officer.”

Colin Powell, former U.S. Secretary of State and retired four-star general in the United States Army:  “You must not hang onto your ego or your past success.  Be passionate about what you think, but not so in love with your original idea that you ignore when it’s time to change it.  If you want to be successful, you have to be ready to throw that which is no longer relevant overboard.”

– the brand story:  Because People First Leadership includes quotes and insights from leaders of some of the greatest organizations in the world, it conveys the outlines of many great brands.  Southwest Airlines stood out to me because of clear connection between the leadership provided by Herb Kelleher, Cofounder, Chairman Emeritus, and Former CEO of the company and the positioning and success of the brand.

Kelleher explains it saying, “Given enough time and money, your competitors can duplicate almost everything you’ve got working for you.  They can hire away some of your best people.  They can reverse-engineer your processes.  But the only thing they cannot duplicate is your culture.  They can copy what we do, but not who we are or what we believe in, and without that, it’s not enough.”

Other quotes describe the unique culture he cultivated at Southwest.  For example, he says, “I really think that our humanistic approach to our people was probably more essential than anything else, because we value them as individuals, not just as workers.”

And he explains the basis of Southwest’s culture:  “Employees and my team come first; then comes the customer.  I don’t think you can really honor, respect, and dignify your people if you say that the customer is always right…So, we don’t tolerate abuse of our employees by our customers. And our employees love that.”

Kelleher concludes, “I always thought that our esprit de corps, the attitude of our employees, was one of our biggest competitive advantages.  You know, people like to be treated nice…and our people do that from the goodness of their hearts.  And that is our advantage over other carriers.”

– the bottom line:  If you are a leader or simply aspiring to be one, read this book.  If all leaders did, more organizations would be successful, more people would be fulfilled, and more brands would be great.

Listen to my conversation with Eduardo to learn: