What Does the Future Hold for Starbucks?

The recent news that Starbucks CEO Howard Schultz is handing over the reins of the company gives me pause.  This the second time Schultz has left the brand’s top post.  The last time was back in 2000 and the brand suffered so much in his absence, he ended up having to return in a dramatic takeover eight years later.  He has since led his team to re-establish Starbucks as a beloved brand with sustained growth and it just had its most profitable quarter ever.  This time, the brand seems to be better positioned to continue flourishing under new leadership, but I am still left wondering what lies in store for the future of Starbucks? 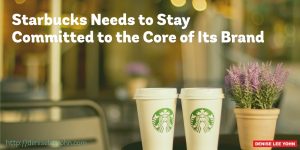 Most reports of Schultz’s departure have focused on the new upscale concepts he plans to develop, Starbucks Reserve and Starbucks Roastery.  While betting that people will pay $12 for a cup of coffee seems a big risk, it’s an even bigger gamble to leave the core business in the hands of folks who may or may not share Schultz’s passion, focus, and discipline on the brand — especially since the core business is continuing to forge new paths.  It plans to open about 2,100 net new stores globally in 2017, it has set a $1 billion increase in revenue goal for its consumer packaged goods segment (e.g., VIA instant coffee), and it is developing a new digital ordering system that uses artificial intelligence technology.

Now more than ever the company needs to be vigilant about preserving the core values of the Starbucks brand.  Its growth and innovation must be aligned with and advance the emotional connection customers feel to the brand, not detract from it nor distract the company from it.  The organization needs to stay committed to the core of its brand, as I advise all companies to do in my book What Great Brands Do.  Only time will tell if it does — in the meantime, what lies in the future of Starbucks?

I suspect the news from Starbucks will center on:

While we contemplate the future of Starbucks, here’s a look back at some of my past content about the brand: