It seems like it was just yesterday when I published my last list of Brands To Watch, but alas 2017 is fast approaching, so I’ll continue the format I introduced in last year’s post and provide a list of Brands To Watch in 2017, one for each letter of the alphabet.  Consider the following an almanac of sorts for brands in the coming year: 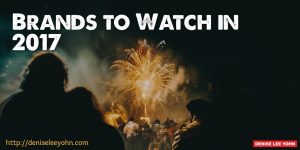 A. America.  The United States of, that is.  With Trump’s assumption of the highest office in the land, it’s unclear what the coming year holds for our country.  We could see significant and surprising changes from Cuba to China and immigration to infrastructure, plus health care, regulation, and more,

B. Barnes & Noble. The venerable bookstore chain has let its CEO go, lowered sales expectations, and shrunk its footprint by dozens of stores.  Meanwhile Amazon Books is opening stores.  Is 2017 the year B&N’s death will become imminent?!

C. Chipotle.  No one thought it would take this long for Chipotle Mexican Grill to recover from its food borne illness crisis.  Recovery plans for the coming year include a new store design, desserts, and digital ordering.

D. Donald Trump.  The future of the Trump brand is in question.  Will the Donald’s presidency help or hurt it?  The election might indicate that the brand has more fans than most imagine, but Trump’s strong campaign rhetoric combined with conflict of interest issues might detract from the brand’s power.

E. Echo and Echo Dot.  Sales of Amazon’s Echo and Echo Dot voice-controlled speakers have topped five million in two short years.  The company is now rumored to be working on a high-end Echo-style device that would feature a 7-inch touchscreen.  Yes, it’s like a tablet-and-speaker in one, and yes, Amazon is continuing to land grab in its fight against tech giants like Apple.

F. Ford.  Bill Ford recently made the bold announcement that autonomous ridesharing is coming in 2021.  It’s a big bet with a potentially huge payoff — but what happens to the brand in the meantime?

G. Google.  The PIxel smartphone that Google introduced in 2016 has gotten off to a great start, with positive reviews and three million units in sales.  Let’s see if it continues to grow and support the company’s strategy of drawing more people to the Android platform.

H. Home Depot — Competition between The Home Depot and Lowe’s has been one of the quintessential retail rivalries.  Currently The Home Depot is growing sales faster and enjoys higher profitability, and at the time I’m posting this, it was popping up as an analyst choice for holiday season sales.  Let the game continue.

I. IPhone.  Apple is expected to commemorate the 10th anniversary of the iPhone launch by introducing a brand new edition.  Radical changes expected include a super-high-resolution OLED screen that stretches from edge to edge of the device, a virtual on-screen home button, and wireless charging capability.

J. JCPenney.  JCPenney’s ability to execute a turnaround has been a crapshoot and its performance in 2017 will probably as unpredictable.  The company is making all the right moves but consumers are spending less on apparel.

K. Kred, Klear, and Klout.  Influencer marketing is fast becoming a common strategy for marketers, particularly for B2B companies where the salesperson’s role has diminished in importance to many customers.  And tools like Kred, Klear, and Klout, which help companies identify and monitor top influencers in their markets, are fast becoming the brands of choice for data-hungry marketers.

L. Lady Gaga.  Lady Gaga made a comeback last year, with a stunning performance of the national anthem at the Super Bowl, a creative tribute to David Bowie at the Grammys, and a new album that has been well-received by critics and fans. This year, she’s headlining the half-time show at the big game.  Paws up!

M. McDonald’s.  The fast food chain will finally leverage its core brand equities in speed and convenience by launching a mobile order-and-pay app and digital kiosks in 2016.  But who knows if it’s enough to produce sustained growth for the struggling chain?!

N. NFL.  Thanks to cannibalization from digital media, continued concerns over concussions, and (some would say) players’ protests during the national anthem, the NFL has been suffering from declining ratings this past year.  I guess Mark Cuban’s 2014 prediction that the league would experience an implosion in 10 years might come true.

O. Oil of Olay.  As one of P&G’s flagship brands, Oil of Olay is a good brand to watch in 2017 to see if reducing the number of brands (to 65 from 200 at its peak) will be effective at turning the packaged good giant around.

P. Prime.  Amazon has been aggressively signing up new members to its Prime service and, according to some speculation, has been losing money just as fast.  In the company’s latest earnings report, the company missed estimates by a wide margin.  Will Amazon raise the membership fee above the $99 rate it’s offered for the last 3 years?  Probably not, but it’s always interesting to see CEO Jeff Bezos convince investors to be patient.

Q. Quest Diagnostics.  As consumers take more control over their health care, companies that once were only B2B plays will become consumer brands.  Quest Diagnostics is one that just announced that it is expanding a test of patient-initiated testing services, including tests for HIV and panels for heart health.

S. Samsung.  The Galaxy Note7 recall has hit the company hard.  And the timing couldn’t be worse, with Google’s smartphone entrant picking up steam (see G above) and Apple’s new iPhone just around the corner (see I above).  Samsung better pull itself out of its hole in the coming year or it might lose more ground than it can recover.

T. Twitter.  It’s do or die time for Twitter.  Either it figures out how to attract more users or it shuts down.  If Trump continues to use the channel the way he did during the campaign, it just might have a chance.

U. Uber.  It’s unclear if Uber will finally do an IPO this coming year.  If it does, it would undoubtedly be the biggest of the year. What is certain is that the company will refocus its efforts on the U.S. domestic market after ceding China to Didi and the development of the self-driving car technology that it sees as key to its long-term profitability.

V. Volkswagen.  The new CEO of Volkswagen recently told reporters “We want to write a comeback story” and announced a 10-year plan that includes a combination of more America-friendly products, better utilization of its plant in Chattanooga, TN, and a commitment to electric vehicles.  Given how profitable of a market the U.S. is for the beleaguered company, it will likely start implementing the plan aggressively.

W. We Chat.  WeChat, the Chinese messaging app owned by Tencent, is rapidly closing in on 1 billion users and seems poised to give Facebook Messenger a run for its money…and lead the ascendance of Chinese brands in the world.

X. Xiaomi.  Another Chinese brand, Xiaomi, is the smartphone maker that most U.S. consumers have never heard of…yet.  It has been teasing a launch during the 2017 Consumer Electronics Show (CES) of the Mi7 which some critics say may be one of the best smartphones of the year.

Z. Zenefits.  Zenefits was once considered a darling of the start-up world for introducing software with the potential to disrupt the entire HR industry and raising nearly $600 million from high profile investors including Andreesen Horowitz.  But it imploded due to uncontrolled growth and regulatory violations.  Now it seems the company is trying to reboot — and if it succeeds, it will show that it is possible to resurrect a unicorn.

P.S.  This list of Brands to Watch in 2017 is highly dominated by U.S. brands and consumer brands, since these are the markets I know the best.  I’d love to hear about foreign and B2B brands to watch in 2017 — please share in the Comments section below.