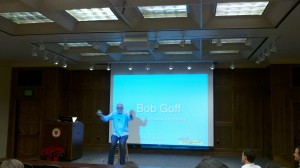 Bob’s address was to college and graduate students as part of University of San Diego’s Thriving in Business series and arranged by Faith@Work.  Although it was intended to help those who are trying to figure out career and calling, I came away inspired by Bob’s message personally – and I wanted to pass along his exhortations because so much of what he shared applies to the business world at large.

Bob opened with the thought that we all have long lists of things we are “able to do;” but the list of what we are “made to do” is much shorter.  As aspiring professionals (or those, ahem, experiencing a midlife crisis), it makes sense to ask, “What are the things God made me to do?”

Likewise, for companies, it makes sense to examine what the company’s creators – the founders — made the company to do.  What purpose did they want the company to fulfill?  What did they design the organization to do well?  What were they hoping to create? A quick audit of some of the world’s most admired brands – Apple, Starbucks, Nike – illustrates this point well.  All of these companies are doing what their founders made them to do.

Bob went further to say, “When you love, you do.”  Passion compels action.  People, and companies, thrive when they pursue their passions.

Bob also talked about how we all don’t want to live a typical life – we want to be extraordinary.  We should all have “Be awesome!” as our mission, he declared.

But being awesome isn’t about broadcasting how awesome you are – it’s about actually doing awesome things.  We shouldn’t wear hoodies emblazoned with messages of how awesome we are, Bob explained – “be awesome” should instead be written on our undershirts so we can sneak a peek every once awhile and remind ourselves of our mission.  He calls this “being secretly incredible.” (see Bob’s article on this topic — believe me, it’s worth the click.)

This totally applies to business.  It’s well-known that chest-pounding ads, one-way conversations in social media, and self-serving PR are offensive to consumers – and yet, so many businesses still spend millions of dollars to do these things, strutting around flashing messages about their awesomeness.  Instead, companies should focus on being awesome.  The recognition and rewards are sure to follow.

Moreover, “be awesome” should be every companies’ internal rallying cry.  Don’t settle, don’t run a typical business, don’t try to be like everyone else – be different and celebrate that uniqueness.

My favorite quote of Bob’s talk was, “If a door is shut, go up and wiggle it a little – don’t assume it’s locked.”  Too often as people, and as businesses, we take “no” too easily.  We accept barriers (e.g., an established market leader, a well-known category norm, rejection from a prospect) instead of trying to breakthrough them.  A little experimentation and perseverance go a long way.

Above all, Bob’s main point was to do stuff – to not just think about doing stuff, but to take some risks, be committed, and get out there.  It’s good advice coming from someone who knows.

Bob’s day job is being a lawyer and he’s also a professor.  But his pursuit of doing stuff led him to start Restore International, a non-profit which was established “to address the atrocities and injustices committed against children.”

His latest efforts have been focused on Roderick, an 8 year old Ugandan boy who recently had his genitalia cut off by a local witch doctor and was left to die in a field. As a result of some extraordinary developments, Bob was able to successfully argue in Ugandan court for Roderick and he got the witch doctor imprisoned.  And now, thanks to the generosity of many folks, Roderick is in San Diego undergoing surgery to reverse the physical damage he’s suffered.

With this backdrop, Bob’s exhortations take on even more meaning and importance.  As people, what are we doing to pursue our passions?  As businesses, are we doing what we were made to do?  As communities, what barriers do we need to breakthrough in order to be awesome?