Motivational Speakers Who Actually Motivated Me 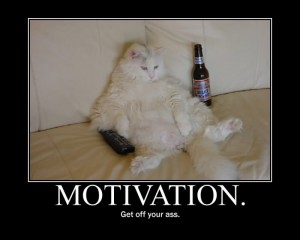 People making a living by telling other people to get off their duffs and do something has always seemed ridiculous to me – but last week, I actually found myself feeling motivated by some motivational speakers.  And I found the notes that I jotted down are actually really helpful as I think about how to improve myself.

You see, I had the opportunity to attend the National Speakers Association annual conference last week.  The event featured instructive breakout sessions, lots of time for meeting people and exchanging ideas, and keynote speeches by some of the industry’s most esteemed motivational speakers.  It was during several of these main stage sessions that I surprised myself by actually getting inspired by the speakers’ messages.  I was prompted to think differently about – and respond to – some of the tried and true clichés that we’ve all heard a million times before.

Be yourself.  Connie Dieken started her presentation about “The Real Deal: Three Secrets to Win Over Your Clients” talking about the problem with the advice to “be yourself.”  We’ve all heard it before – when we go for a job interview, when we meet someone important, when we take the stage to make a speech, people tell us to just “be yourself.”  In this age when people place a premium on authenticity, being yourself seems the right thing to do.

The problem with this, Connie explained and I agreed, is that sometimes yourself isn’t good enough, or isn’t right for the situation.  What you need to be, sometimes, is better than yourself – be visionary, be courageous, be tough, be sensitive, be entertaining, be excellent. So, there’s a conflict between authenticity and perfection.

To reconcile this conflict Connie suggested we cultivate presence – actually there are three layers of presence.  Our inner presence is how we experience ourselves and how we make decisions.  We cultivate this by being centered on our purpose and developing confidence, which she described as “the expectation of a positive outcome in a specific situation.”

Verbal is the second layer of our presence – it’s how we reveal our messages to others.  We need to think about how our words enable us to connect with others and how they act as a transfer mechanism for our credibility.  If we have too little verbal presence, people won’t bother to listen; too much and they’ll feel like they’re being preached to.  We need to find the center point between the two extremes.

This framework was really helpful to me because it emphasized centeredness.  “Being yourself” is about finding your center.

Do whatever it takes.  Former NBA player Walter Bond’s talk was supposed to be about “Making BIG Money NOW” (this is the kind of topic that prevails at the NSA), but I learned more from him about being humble.

Although Walter played basketball in college, he wasn’t drafted by any NBA teams.  And yet, he ended up making NBA history by becoming first rookie free agent ever to start on opening night (for the Dallas Mavericks, no less!) and ultimately he played in over 150 NBA games.  What got him there was a clear vision of what he wanted to accomplish and a tireless work ethic – but most importantly, it was a willingness to do whatever it took to realize his dream, even if it meant swallowing his pride.

In Walter’s case, “do whatever it takes” meant being humble enough to take a seat on the bench and wait his turn.  He knew he was good but he allowed others to underestimate him.  He accepted his lot as a free agent, being traded from team to team, and yet he persevered.

“Achiever” is one of my top five strengths according to the StrengthsFinder assessment – Walter taught me that humility plus grit and determination is the key to achieving my goals.

Take courage.  Robyn Benincasa seems to epitomize courage.  She is a professional adventure racer, meaning she gets to bike through the jungles in Borneo and climb the Himalayas while competing against other extreme athletes from around the world for prize money – and bragging rights.

In her NSA talk, “Extreme Performance: Why Winners Win,” her story of being covered in leeches while trekking through a cave filled with bat guano gave me the willies – and it also gave me a new perspective on courage.  As she and her teammates were walking through knee-high bat guano, her shoe got stuck and came off.  She told us that at that moment she lost it and started to cry – apparently this is not something she’s prone to do, but it happened.  After one of her teammates retrieved her shoe, he grabbed her hand and got her back on her feet, and they continued on.

It was hard to believe that someone as tough as Robyn would cry, but it was even harder to believe that she would then just get on with the trek.  The incident was a momentary setback but it didn’t derail her.  She observed, “Courage is about crying and continuing to walk forward anyway.”  And she went on to tell many other tales of her and her team mates’ courageous moments.

I loved this perspective on courage – it’s not about toughness; it’s about commitment.

I expected to walk away from the NSA conference armed with tools and tips to use as I prepare for the launch of my book – and I certainly did.  I didn’t expect to get a dose of motivation as well — but am glad I did that too!