As an uber-competitive overachiever, I’ve always had trouble with failure. (Just ask my husband who refuses to play board games with me so he doesn’t have to deal with my inevitable sore loser attitude!) 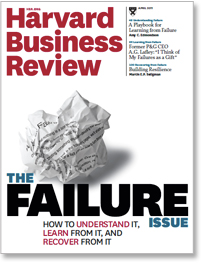 But last month’s Harvard Business Review gave me some fresh perspectives on failure. The Failure Issue helped me understand how to manage failure relative to myself, others, and the process of learning through it. My main takeaways were about the importance of:

This, the first in a three-part mini-series on failure, covers the takeaways on self.

Failure doesn’t seem so bad based on the HBR articles that outlined ways to prepare myself for it and ways to better recover from it. Generally speaking the pieces suggested that both preparing for and recovering from failure require diligence to be more self-aware and courage to soberly assess how I’m wired.

In one of the HBR pieces, Martin Seligman, known by some as the father of positive psychology, outlined his work on a $145MM initiative to make the U.S. Army as fit psychologically as it is physically.

The program begins with a Global Assessment Tool (GAT), a 20-minute questionnaire that focuses on strengths and is designed to measure the emotional, social, family, and spiritual fitness of Army personnel. All four types of fitness have been credited with reducing depression and anxiety. Strong emotional fitness, for example, helps amplify positive emotions and discerns when negative ones are out of proportion to the reality of the situation.

Although the tool is proprietary, the framework seems to be a helpful approach to self-assessment. Evaluating yourself in each area of fitness reveals your vulnerabilities when it comes to handling the stress of failure.

The program also includes training on how to work through failure. Army drill sergeants and other leaders undergo Master Resilience Training which teaches them to identify “thinking traps” such as over-generalizing or judging a person’s worth or ability on the basis of a single action. This in turn helps them build the mental toughness they need to have during times of crisis.

The HBR issue also included a write-up by a couple of consultant/educators who identified 11 personality types likely to have dysfunctional reactions to failure.

For example, “Wary Watchers” are smart but overly sensitive to criticism and always on the lookout for betrayal, “Martyrs” accept more blame than they deserve in order to preserve work relationships, and “BMOCs” ingratiate themselves with superiors in the hopes of avoiding blame. As much as I hate to admit it, I saw myself in some of the descriptions.

But as the authors suggested, while the first step is to recognize these tendencies, it’s most important to overcome them. One way to do this is to reflect on challenging events or jobs in your career and consider how you handled them and what you could have done better. Another is to ask trusted colleagues or mentors to evaluate your reactions and explanations for failure.

HBR made clear the need to proactively and continuously monitor yourself and your actions. Humility doesn’t hurt either. The issue also featured a summary of books on failure such as “Typo: The Last American Typesetter or How I Made and Lost 4 Million Dollars” and “The MouseDriver Chronicles: The True-Life Adventures of Two First-Time Entrepreneurs.” The summary featured a list of mistakes most failed entrepreneurs had in common – among them was “I thought I knew everything – I didn’t.”

Ouch! Becoming self-aware can be painful – but it helps you learn from and recover from failures in your past. And avoid them in the future.

tomorrow’s post: what the HBR said about failure and dealing with others