When it comes to predicting what will happen in 2018, I’m following Casey Stengel’s advice:  “Never make predictions, especially about the future.”  But I am keeping my eye on some brands because I’m pretty sure they’ll be making the headlines in the coming year.  So, here’s my list of Brands to Watch in 2018, in my annual tradition of one brand per each letter of the alphabet: 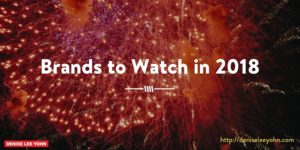 AMAZON.  A is always the hardest letter to write in this list since there are so many candidates, including Alibaba (the Chinese e-commerce giant with nearly 550 million active mobile users per month,) Airbnb (which is rapidly expanding into new markets and offering new services like Experiences), and Apple (I cheated — see X below).  But Amazon remains my top choice for the way it is disrupting every area of business, from grocery stores to health care and pharmaceuticals, cloud services, and more.

BLUE APRON, which has struggled to woo investors since its June IPO and recently laid off hundreds of workers, is only one of the many meal-kit and food delivery services that seem to be struggling.  Some say the big meal bubble has burst but I suspect it’s only undergoing significant changes since Americans continue to value the convenience and choice these services offer.

CVS Health’s ballsy offer to acquire Aetna for $66 billion earlier this month is likely to get approved.  And we’ll surely see more M&A and JV activity in healthcare as players try to get in front of Amazon’s eventual entry into the space.  Fortunately for customers, such moves are likely to drive costs down and convenience up.

DONALD TRUMP has been my “D” brand for two years now.  His Presidential brand has unquestionably been the most unusual we’ve seen and the unbelievable antics will only continue.  Between North Korea and Russia on the international front to healthcare and immigration domestically to his own staffing and family affairs, there’s so much about The Donald to keep an eye on in the coming year.

ETHEREUM.  I am just as confused by cryptocurrency and blockchain technology as most people are, but I’m pretty sure their influence on our economy is likely to continue to grow.  Ethereum, an open software platform based on blockchain technology, enables developers to build and deploy decentralized applications.   Given how wide-ranging it can be, I’m guessing we’ll be hearing more about it in 2018 and beyond.

FACEBOOK.  Nearly 200 million U.S. adult users spend an average of 41 minutes a day on Facebook — that fact alone makes this brand noteworthy.  But 2018 will bring more newsy developments given its involvement in the Russian election meddling, new features like its Watch video tab, and continued acquisitions.

GALAXY, Samsung’s mobile device product brand, remains a formidable challenge to Apple.  The Galaxy S8 Plus has been viewed as a viable — even preferable, in some cases — alternative to the iPhone X, and the S9, due out early next year, will feature a massive redesign (likely including dual cameras).  But the Galaxy X with its expected folding display may catapult it well far ahead of even our imaginations.

HUAWEI.  My bullish take on Samsung aside, I also continue to track Chinese smartphone giants Huawei and Xiaomi for their strength in international markets.  Huawei’s Mate 10 Pro holds its own against the Galaxy 8 and iPhone 8 and the brand is the smartphone market share leader in China (Apple is #5, Samsung , #9).  Meanwhile Xiaomi is gaining a winning position in India, investing over $1 billion in 100 Indian startups to build out a robust ecosystem of mobile apps.

INDITEX, owner of retailer Zara, is one of several fast-fashion brands I’m watching.  H&M and Fast Retailing’s Uniqlo have also dominated the retail apparel landscape in recent years because of these brands ability to win customers with trendy styles and cheap prices.  They’ve shown that logistics has become as important as marketing has to retailers, as retail leadership depends on delivering hot styles, maintaining low inventories, and refreshing fast-selling items to keep costs down while meeting fickle consumer demand.

JC PENNEY continues its slow slide downhill.  I’m writing this before early results of the holiday season are available, but there’s no reason to be optimistic about this brand’s future.  Although Sears has resurrected its Wish Book holiday catalog and Macys is planning a rooftop expansion to its flagship store in New York, there seems little any department store can to do offset the sad fact that they’ve have lost their reason for being.

KRAFT and KELLOGG.  I’m putting these two packaged foods brands on the list since their industry is under a lot of pressure.  Although both Kraft Heinz and Kellogg posted recent sales increases for the first time in years, consumers’ interest in packaged food is being replaced by fresh food available at grocery and convenience stores, visits to restaurants, and food delivery services.  Grocery stores are also trying to figure out how to adjust to these shifts in demand.

LINKEDIN is growing in terms of users, usage, engagement, and revenue.  It’s become a powerful partner to recruiters and salespeople alike and integrations with Microsoft seem to hold a lot of promise.  I suspect this is the social network we’ll hear the most positive news about in the coming year.

MODEL 3 by TESLA.  Model 3s may have started rolling off the factory floor but concerns about Tesla’s production capabilities remain.   The company managed to amass nearly 500,000 pre-orders of the car and it adds 1,800 people to the list every day, but it will only produce about 1,000 cars per week by the end of the year.  It’s unclear if Elon Musk’s recent announcements of the Tesla Semi Truck and surprise new Roadster will generate enough brand heat to sustain the public’s love affair with the brand despite the extraordinary delivery delays.

NIKE announced in October it was revamping its wholesale strategy to emphasize only 40 retail accounts including Foot Locker and Nordstrom out of the 30,000 retailers it had been distributing to.  The move, which is part of the company’s overall strategy to turnaround sales and share losses by focusing on digital and direct sales, sent shock waves through the retail industry, which was already suffering from the closure of 6,700 stores in 2017, more than any other year on record.  Many folks are interested in Nike’s performance in and of itself, and, given its size, as a bellwether for retail in general.

OLD NAVY.  Earlier this year, Gap Inc.’s CEO Art Peck drew “a line in the sand” and decided he would close about 200 Gap and Banana Republic stores and refocus on the company’s other brands Old Navy and Athleta which have more potential for growth.  Will the shift save the venerable retailer?  Only time will tell.

PELOTON is the latest indoor cycling market to attract legions of fans and disrupt the fitness industry, following the celebrity-fueled success of SoulCycle and newcomer Flywheel.  Earlier this year Peloton closed a $325 million round of financing, SoulCycle has been opening up to 20 studios a year, and Flywheel is the brainchild of former Nike, Pepsi, and Equinox brand builder, Sarah Robb O’Hagan.  Combining community, technology, and a music platform,  these fitness brands are marketing powerhouses that deserve our attention.

QUALCOMM can’t seem to get a break.  First its legal battle with Apple over patent licensing fees has been costing it revenue.  Then its efforts to purchase NXP Semiconductors NV started facing headwinds.  Now Broadcom is considering upping its offer to acquire the company.  Consumers need Qualcomm to prevail over these pressures because the company facilitates competition in the smartphone market, which in turn impacts the speed, functionality and cost of smartphones.  Keep an eye on this one, folks.

SALESFORCE is on a roll, with recent Q3 revenue up 25% to $2.68 billion.  Earlier this year it signed a partnership with IBM that integrated the companies’ artificial intelligence capabilities.  More recently it announced it is partnering with Google to integrate Google’s G Suite-branded business software with Salesforce’s sales tools.  The cloud software powerhouse will likely close its fiscal year in January with revenue above the $10 billion mark.

TENCENT.  Although Tencent is not currently well-known outside of China, its WeChat messaging service has close to 1 billion users and it owns a wide array of gaming, social media, news, and content businesses including Playerunknown’s Battleground, the world’s hottest video game.  And if that weren’t enough reason to keep the company on your radar, consider that it has just become the first Asian technology firm to reach the $500 billion valuation mark, surpassing Facebook in terms of market value.

UBER‘s new CEO Dara Khosrowshahi has a big year ahead of him.  He’s already set about repairing the company’s culture, setting new “cultural norms.”  He’s decided to take the fight over the employment status of its U.K. drivers to the Supreme Court.  He has to continue to move aggressively in the driverless car arena.  He’ll have to figure out how to parlay Softbank’s multi-billion investment offer into deals with competitors in India and Southeast Asia.  And he may decide to take the company public.

VERIZON.  2018 will bring the rollout of Verizon’s next generation 5G network, the shot in the arm the company needs in an increasingly saturated wireless market.  On the flipside, Verizon, along with other communications and entertainment players such as Disney and Comcast, could be limited in its content acquisition plans, depending on the terms of the Department of Justice’s approval of the proposed AT&T/Time Warner merger.

WALMART.  From setting lower-than-online in-store prices, to improving logistics capabilities to deliver shipments and restock shelves faster and at lower cost, buying up specialty e-commerce brands like Moosejaw and Bonobos, holding in-store parties, and more, Walmart is firing on all cylinders against Amazon.  Amazon is fighting back with greater selection, more Prime deals and offerings, and its new brick-and-mortar presence with Whole Foods.  In this ongoing competition, the customer will win — and get quite a show.

X, as in Apple iPhone X. Even at a starting price of $999, the iPhone X has won many hearts and dollars in just a few days.  With Face ID security, a high-quality OLED screen, advancements in processor design, and more, the new product seems to be living up to the hype surrounding the iPhone’s 10 year anniversary.  What will top it in 2018?  A 6.5-inch iPhone X Plus perhaps?

YELP has enjoyed a leadership position in online reviews for the past several years, but pressure is mounting.   Solicited reviews from aggressive businesses are turning off customers, the company continues channel precious resources to its battle with long-time nemesis Google, and now Facebook has relaunched its Events app as Facebook Local and it includes Yelp-like features.

Z, as in Generation Z.  Millennials move over; Generation Z is the new consumer group to watch.   Born after 1996, Gen Z-ers are 65 million people strong (vs. Y’s 80 million) and have a purchasing power of approximately $44 billion.  That number will only rise as more start their wage-earning years.   They differ markedly Gen Y in terms of use of technology and attitudes toward spending, education, government, etc.  We need to get to know this new generation — fast.