Brand Book Bites from Do Lead

– the book:   Do Lead:  Share your vision. Inspire others. Achieve the impossible — a deceptively short and extremely practical read 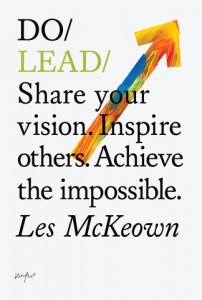 – the brain:  Les McKeown is one of the leading authorities on leadership today.  Les has advised CEOs and senior leaders at Harvard University, American Express, T-Mobile,and Chevron; written 2 other fantastic books on leadership including the breakthrough text Predictable Success; and has started over 40 of his own companies.  So, he has the real-world experience and know-how to deconstruct the topic of leadership and shed important light on how to lead.

– the best bits:  Do Lead challenges many of myths about leadership out there today, offers up a more accurate and pragmatic definition of leadership, and relays relevant tools and steps to effective leadership.  Here’s a sample of each:

Myth:  “Leadership isn’t about genius.  Leaders sometime come up with truly remarkable ideas…Sometimes, leadership is the opposite:  eschewing the highly creative, knock-it-out-of-the-park blue-sky idea for the mundane; choosing between not very risky alternatives; or on occasion, simply making a statement of the bleeding obvious.”

Steps:  How to influence groups and teams when you’re not their de facto leader:

– the brand story:  Les’s book concludes with four vignettes of leadership, so the “brand” stories are about the unexpected leaders of brands.  One of them introduces Thomas, who at the age of five, decided he wanted his parents to adopt a younger brother from Russia.  At first his parents dismissed his request as a far-fetched dream, but Thomas kept on bringing it up again and again.  After years of hearing his plea, his parents started to explore the possibility and ended up making the adoption a mission for their family.  After years of working through the system, they finally brought Nicholas into their home.  But then Thomas decided there was some work left undone.  He learned their were many more orphans like Nichols living in harsh conditions and so he launched what ended up become an annual Christmas Appeal to send show to the children in Nicholas’s former orphanage.

“At nine years of age, Thomas firmly believe he could make something happen in the world.  By setting up a website, talking to the world through video about his passion, and making a specific and simple request of them (give me money to send shoes to orphans), he learned he could move people into taking action.”

What an inspirational story — and one that reveals what leadership really looks like.

–  the bottom line:  Do Lead is a handbook for anyone who wants to make a difference.  You can read it in less than an hour but it will make a lasting impression.

Check out my interview with Les to learn: