what your underwear says about you

My Patagonia catalog arrived in the mail today and I was reminded once again of all the things the Patagonia brand does that don’t seem to make sense — but they do.  The catalog’s inside cover spread, 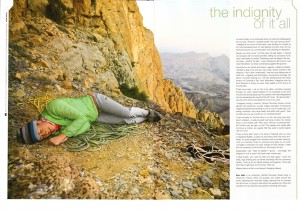 featuring a picture of fallen rock climber Zoe Hart and the story about her breathtaking fall and valiant recovery, captivated me…and yet it seemed to have nothing to do with Patagonia.

I mean, perhaps the clothes and shoes which Zoe is wearing in the photograph are from Patagonia — but there was no indication of such — and even if they are, you can’t really see them very well or read any information about them.  Plus, they’re shown on Zoe as she lies in agony after her 30 foot fall —  I’m guessing most brands wouldn’t want their products shown in such a graphic context.

But that’s the point — Patagonia isn’t like most brands.  In fact, one could argue there is no other brand quite like it.  The company does things which leave most other businesses baffled.  Recently it got some buzz from its move to remove all packaging from its underwear  — take a look at the video from Fast Company in which Patagonia Founder Yvon Chouinard explains how much pushback he initially got from his team when he suggested making this change.

Other examples of Patagonia’s unique operations:

I could go on — but instead, I’ll simply recommend you read the book, “Let My People Go Surfing,” a memoir/manifesto from Chouinard.  It is one of the best studies on “brand-as-business” — that is, how a company operationalizes its brand values.  The stories and principles relayed in the book provide a strong challenge to the way most people build a brand and run a business.

Which brings me back to my original point:  the Zoe Hart catalog spread which stopped me in my tracks was such a departure from the product- and sales-oriented catalogs du jour — it seemed to have nothing to do with Patagonia, but in fact, it had everything to do with it.

The Patagonia brand is all about courage, commitment, and challenging conventions — in everything it does.