The multiple sexual abuse crimes committed by Dr. Larry Nasser, the former USA Gymnastics national team doctor, are quite unbelievable.  But they are actually only one reflection of the destructive and dysfunctional culture within the USA Gymnastics organization.  And they show other organizations and their leaders exactly what not to do if they want to produce a high performance culture. 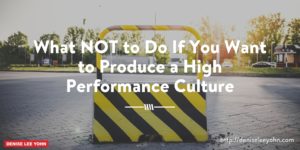 The pressure to sustain a high performance culture within USA Gymnastics is understandable. As a national governing body, it is responsible for the day-to-day running of the sport and nominating athletes for international competitions, including the Olympics.  And the U.S. likes to win at the Olympics — we expect to win more and better medals than any other country, especially in a fan favorite sport like gymnastics.

So the U.S. Olympic Committee, which has the power to remove its support from and decertify governing bodies, puts tremendous pressure on USA Gymnastics to maintain a leadership position for the U.S. at the Games.  That pressure trickles down from the board to the coaches and staff and ultimately onto the athletes.  Moreover, to develop medal-winning athletes, the organization must spend millions of dollars; most of those dollars come from corporate sponsors like Procter & Gamble and Kellogg’s; and sponsors only want to support winning athletes, so a vicious cycle escalates on the backs of the athletes and their performance.

To keep up with all these expectations, USA Gymnastics pushes its athletes to unthinkable levels.  Athletes are pressured to perform when injured, says Jennifer Sey, a former member of the artistic gymnastics national team.  In a New York Times piece, she writes that after she broke her femur, her coaches pressured her to remove her cast early so she could compete in the next national championships.

Sey also says she was antagonized about her weight, hearing “I don’t coach fat gymnasts” frequently from her coaches.  2012 Olympic gold medalist McKayla Maroney told GymCastic that gymnasts were often uncomfortable eating to satisfaction in front of their coaches and the national team staff for fear of being perceived as not committed to keeping their weight down.

After a poor showing by the U.S. at the 1996 Olympics and the 1997 world championships, USA Gymnastics shifted from using Olympic trials as the basis for athletes’ Olympics eligibility to screening them at monthly training camps.  Tracee Talavera, a 1980 and 1984 Olympian, suggested to Deadspin that this more arbitrary system didn’t represent the athletes’ best interests.

“Pretty much nothing is given to the athletes in terms of control of their career, their placement, what is happening with them,” she observed.

And then there was the sexual abuse by the former team doctor.  Exactly who among the USA Gymnastics board and the U.S. Olympic Committee members knew about the abuse and when they knew it is just now coming to light.  It’s clear that some of them were aware of allegations against Dr. Nasser and did nothing to address the problem.  They chose to turn a blind eye given that the U.S. continued to produce winning athletes.

But getting people to achieve unbelievably high goals and perform to impeccable standards does not require leaders to breed such a destructive and dysfunctional organizational culture.  Many organizations are under similar pressures to produce nearly impossible results and maintain their elite high-performance identities.   Sports teams, military groups, high-risk organizations, and even some corporations face dire consequences if their people don’t perform at their highest level.

The leaders of these organizations succeed by adopting healthier, more sustainable ways to cultivate a performance-oriented culture.  They:

Navy SEALs operate by a creed that clearly delineate the values of the team.  The creed states that “loyalty to Country and Team” is beyond reproach and includes phrases such as “I persevere and thrive on adversity.”  It also states “My Nation expects me to be physically harder and mentally stronger than my enemies” and “The lives of my teammates and the success of our mission depend on me.”  By acknowledging and connecting the expectations on team members that people inside and outside the organization have in a single statement, the SEAL organization ensures they are not in  conflict and actually support each other.

At NASA, performance targets are set at the individual, program, project, agency, and cross-agency levels.  Strategies are set through a dynamic process of collecting evidence (data, research, or end product) and conducting rigorous independent evaluations of the evidence.  And performance evaluation processes consist of internal and external reviews, including independent assessments and verification.  All of this is laid out with clarity and transparency in a 15-page document so everyone in the organization shares one common understanding of how they’re expected to perform.

Amazon embraces a management philosophy from Japanese lean manufacturing called “The Andon Cord,” in which an assembly line employee can at any time pull a cord to stop the line and force an inspection if he or she suspects quality or safety has been compromised.  Similarly at Amazon, employees in customer care who learn that a product defect is causing customer complaints can “pull the Andon cord” and shut it down until the technical team addresses the problem.  It’s a drastic move that employees rarely take but it’s one example of how they are empowered to draw attention to problems.

Also the company is guided by fourteen “Leadership Principles” that set clear standards for performance.  One of the principles “Take ownership for results” describes how employees are expected to take complete ownership for their projects and their outcomes — including failures and poor performance.   This causes them to learn from their mistakes and adjust their future actions and decisions accordingly.

These are just a few ways that organizations successfully integrate high performance expectations into a healthy, productive culture.  As USA Gymnastics tries to rebuild its culture in the wake of the sex abuse scandal, it will discover that organizational performance and health are not inherently at odds and can actually fuel each other.