What Should Uber Do?

Uber seems to be under fire from all directions.  The ride-sharing service is being blocked by some cities and entire nations, dealing with accusations of a driver having sexually assaulted a passenger, addressing a story by a reporter who felt threatened when a company executive suggested they try to squash negative coverage, receiving criticisms over surge pricing during the recent incident in Sydney, and being sued for allegedly making false claims about the safety of its service.  You’d be right for wondering if Uber might fall even faster than it rose. 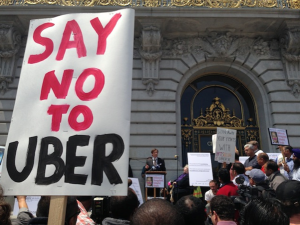 But predictions of its death are probably premature.  With a valuation of $40BB and legion of customer fans and satisfied drivers, Uber has enough equity to keep it afloat for awhile.  However these problems aren’t just going to go away.  They must be addressed — and it’s going to take more than the skill and strategies of David Plouffe, former Obama campaign manager and White House advisor who recently joined the company as senior vice president of policy and strategy.

While Plouffe focuses on taming the regulatory controversies, here are three actions the company should take to regain people’s trust and restore its status as one of the most promising start-ups:

Shut down its service temporarily.  Uber should follow the crisis management prowess displayed by Tylenol years ago when tainted pills were discovered.  The company moved quickly to clear all store shelves of its product until it could ensure it was once again safe to consume.   A more recent model is Howard Schultz’s action when he returned to Starbucks in 2008 after the chain seemed to be losing its edge.  He shut all of the stores down for an afternoon so he could retrain and refocus all of the company’s employees.  In addition to the internal benefits such a bold move achieved, it also sent a powerful message to the public about his seriousness in turning things around.

Uber should take a pause and re-conduct background checks on every single one of its drivers.  Doing so would certainly uncover any potential problems; moreover it would give evidence to the company’s claim that its primary concern is the safety of its customers and drivers.  Of course, such a step would be costly in the short-term — but given how bullish investors seem about the company, it could figure out a way to afford it.  And if Uber alerted customers and drivers well in advance of the shutdown, it would avoid surprising or disappointing people.  In fact, many would probably welcome the action.

Unleash the power of its community.  While companies can no longer control the public conversation about their brands, they can certainly influence them.  But so far, amidst all the negative publicity about Uber, the only voices that seem to be supporting the company — or at least trying to — are from company executives.  Why aren’t we hearing stories from customers about the convenience and cost-savings that Uber provides?   What about the way the company has enabled people to be better stewards by consuming and driving less?  And what about the Uber drivers who enjoy the flexibility and extra income that the business model affords them?  Better yet, we should be reading about the reduction in drunk driving that Uber surely contributes to.

Uber’s most important brand advocates are its users.  As of a year ago, Uber was providing more than 100,000 trips per week in each of its largest cities.  Surely there are powerful stories to be curated and shared from this base.  It would inappropriate to try a corporate brand campaign to relay these messages.  But the company should initiate community engagement and public relations to ensure a more balanced conversation about its brand.

Design the brand experience.  Uber’s success stems from the simplicity of the idea behind it — people push a button on their phones and they get a ride.  But this simplicity can also lead to myopic management of the business.  Uber can no longer operate as a technology product — an anonymous middleman between a rider and a driver.  It is now a lifestyle brand and as such, the company must take responsibility for the entirety of its brand experience.  Uber drivers may not be employees of the company, but they are the primary brand touchpoint for most customers.  Uber executives are no longer behind the scenes programmers and designers — they are now public representatives of the brand.  Uber needs to shift from simply selling a product to attracting people to its brand.  And the way to do that is to embrace and reflect values that people share and a brand character that people admire.  Perhaps a starting point would be to shift from thinking of service as its product to embracing service as a core value.

Uber has an important decision to make.  It can react to the recent challenges taking its success for granted and continuing to operate business as usual.  Or it can undertake significant, substantive changes and ensure continued leadership and growth by recognizing that, to borrow a phrase, what got them here won’t get them there.