love is all you need

This is a post about love. I don’t mean the touchy-feely romance between lovers love — nor the air-kiss-“you-look-mahvelous” social lubricant love. Rather, I mean love as a game-changer for business leaders.

Now, I have to admit my past approach to business has been better captured by the title of Tina Turner’s song, “What’s Love Got to Do with It” than by the Beatles’ “All You Need Is Love.” I mean, I’ve understood that the powerful connection some people have with brands is a type of love – and I’ve always sought to serve my colleagues and my clients in a loving way. But I never really appreciated love as a driver of business — as a critical element at the highest level of business strategy and structure – until now. 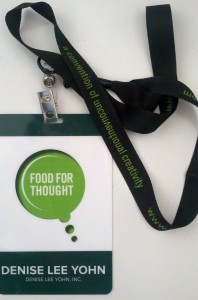 My eyes were opened at the Food for Thought Conference, an event produced by Erwin-Penland, a full-service marketing agency based in Greenville, SC. To call the event a conference is really a disservice, though – it’s an extraordinary 360 degree experience. It came closer to TED than any other gathering I’ve attended. World-class speakers, fine dining, inspiring venues, Southern hospitality, and once-in-a-lifetime activities filled the 2 ½ days I spent with 80 other attendees.

But, of all that Food for Thought gave me to enjoy, experience, and think about, the most profound was love. I was challenged to think about how love changes the business of business. I realized that when businesses are grounded in love and when leaders love the people around them, the result is growth and goodness and success and strength — all the things that we aspire to in business.

Love has this incredible power because it enables risk-taking. Leigh Anne Touhy the inspirational woman played by Sandra Bullock in The Blind Side movie, credited love for her family’s incredible story. As she shared her personal Blind Side observations and advocated for serving the underserved, Leigh Anne showed herself to be a no pull-no-punches kind of woman.

Her love for Michael wasn’t some sentimental feeling that simply broke her heart – she took some major risks, crossing racial, cultural, and emotional boundaries to love him. Leigh Anne explains the difference love makes, saying “Everyone has a blind side, but a loving heart always sees a path toward true charity.”  Of course, business is not about charity, but it is about filling real needs.  To see and respond to the real needs of customers and employees requires love.

Love’s power also engenders trust. Doc Hendley, global drinking-water crusader, spoke about building water wells and providing a path out of poverty for thousands of people.  He’s been able to penetrate some of the most remote and dangerous places in Africa, India, and South America because of love.

Of course, he loves the people he’s serving; but he also shows love to the hostile leaders and crooked soldiers who act as gatekeepers of access to these communities. When his efforts are blocked, Doc says, “Sometimes the best fix is a handshake and a look in their eye. I say ‘let me go play with your kids’ and that means so much to these men.” He relates to them as husbands and fathers — as people — and his love wins them over to his cause.  What an important lesson as business leaders seek to build relationships with customers and employees alike.

Love is powerful because it leads us to connect. Tiffany Shlain, Internet pioneer and acclaimed filmmaker, described the power of love as she introduced her new feature documentary, “Connected: An Autoblogography about Love, Death & Technology.”

In the middle of making the film, Tiffany’s father passed away, so what began as a project to examine connectedness between major issues like the environment, technology, human rights, and the global economy became a journey of personal discovery about the role of connections in her own life. She reported she’s learned to believe in the human species and that it leans toward good: “Love, curiosity, and the need to connect is going to propel us to good.”  I’d like to think business leaders are tapping into this incredible power.

These speakers’ perspectives were only one of the ways I came to understand love’s transformative power at Food for Thought. I also got to experience firsthand what love can do to a business community.

Joe Erwin, the founder and president of Erwin-Penland, loves the city of Greenville and has formed a powerful community of business leaders who promote Greenville as a great place to do business. The community includes leaders at the city’s biggest organizations including BMW (which calls Greenville home for its North American Visitor Center and Performance Driving School) and Michelin, as well as local businesspeople like restaurateur Carl Sobocinski, and even the owners of Fluor Field and the minor league baseball team Greenville Drive – all of whom hosted the conference gatherings.

I’ve never seen a business community with such passion for their city and commitment to each other. Their love – demonstrated through mutual generosity, support, and advocacy — yields dividends in economic development, political power (anyone catch the Republican Presidential debate held there a couple of weeks ago?), and cultural growth.

As attendees, we were showered with love by Chef Art Smith (executive chef and co-owner of Table Fifty-Two and Art and Soul restaurants) who served us a 5-course dinner after cooking lunch for the Obamas and Oprah; John Ondrasik (Five for Fighting) who treated us to a private concert including his hit songs Superman and World; and by the Erwin-Penland team who executed all the little details of the conference flawlessly.

These weren’t simply amazing experiences; they were examples of how love produces greatness. When people love what they’re doing, they do it with excellence.

I’m so thankful for the opportunity to have participated in Food for Thought. Through it, I’ve become convinced that “All You Need Is Love” isn’t just a song title, it’s a mantra for business.