featured an insightful analysis of “Survivor,”

the reality-show pioneer from CBS, currently in its 16th season — the piece recaps the show’s rise to popularity and its current slow decline.

Once again, Hollywood has provided an excellent lesson in brand-building (see a piece of mine “The Brand Ultimatum” published this past summer by the American Marketing Association about how a deep brand identity – one with rich, multiple layers of associations – fuels successful extensions the way a deep hero character like Jason Bourne or Harry Potter fuels a successful movie franchise.)

This time the lessons from “Survivor” are about creating and managing a brand hit.  The show is a worthy case study.  In its second season (early 2001), the show ranked #1 in prime time and sustained 20MM weekly viewers for 4 more years.

The factors contributing to its success, according to NYT’s Brian Stelter (whom I’ve quoted liberally here), were:

–  its ground-breaking nature — it’s hard to imagine a world before reality TV, but we have to remember how “audacious” the concept was –“when it started, it was almost inconceivable that regular people could be prime-time TV stars”

—  for brand development, the lesson is the importance of innovation — truly innovative brands challenge norms and change the way we think, feel, and/or live

–  CBS’ risky investment — “Given the first season’s success, CBS made the daring decision to schedule the second season on Thursdays at 8, the first hour of network television’s most lucrative night. ‘Survivor’ was facing the NBC sitcom ‘Friends,’ then TV’s most popular program.  Mr. Probst [the show’s host] asked Kelly Kahl, head of scheduling for CBS, why the network seemed to be setting up “Survivor” to fail. Mr. Kahl’s reply: ‘When you have a sledgehammer, you have to use it.’”

— for brands, the lesson here is about taking risks — bold investments are necessary to generate bold results — if you believe in your brand, swing for the fences 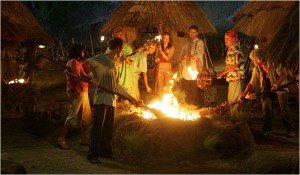 — for brands, the lesson is about storytelling — consistent storytelling.  People love stories.  Whether it’s the reluctant warrior, inspirational figure, or scrappy underdog — different types of roles are appropriate for different types of brands but the emotional resonance of a brand is best derived from the power of plot in which the brand plays the role of the hero.  Likewise, elements of the brand’s story may evolve or mature over time, but its fundamental attributes should not.

In the article there are many other gems of wisdom for brands based on ‘Survivor’s’ success but I’ll close this entry out with the most significant one — it’s about the show’s decline (50% drop in viewership over the last 8 years.)

Essentially the article’s point is that while the show may be down, it’s definitely not out.  Stelter states, “CBS would be foolish to let ‘Survivor’ retire, at least until it comes up with something that will deliver higher ratings in the time slot.”  So it seems, “The task for Mr. Burnett’s staff, then, isn’t to expand the ‘Survivor’ brand. It’s to manage the decline.”

Similarly, brand managers need to know when their brands have reached a similar point — when, rather than pursuing desperate, expensive, and fruitless attempts to keep a brand alive, they should acknowledge the brand’s time has clearly passed.  And, while executing a graceful exit for one brand, they should channel their creative energies into developing a new breakthrough with another.

As the brand world turns…