launching the next wave at tedxsandiego

America’s Finest City has lived up to its name once again.  The inaugural TEDx event here in San Diego earlier this week was everything the organizers promised (“bringing together innovators, explorers, teachers and learners in an environment that encourages collaboration, conversation and interaction“) — and everything I hoped it would be. 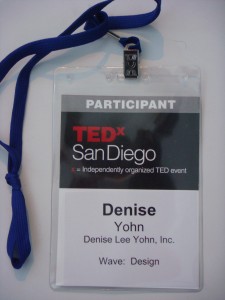 You see, awhile back I had the honor of attending a couple of the main TED events (one of the few perks I got to enjoy while working at Sony, a sponsor of TED.)  Back then, the gathering was held in Monterey, CA, and moderated by Richard Saul Wurman.  I fondly remember magical moments like being fascinated by Marvin Minsky‘s talk about the human mind, chatting in the elevator with Thomas Dolby, hearing Hazel Miller serenade the crowd, and watching Dean Kamen ride around the conference on his newly-introduced Segway.

But it had been a long time since I had been to a TED and no other experience I’ve been to since has impacted me in the same way.  Earlier this year, Anya Kamenetz wrote a piece in Fast Company arguing that TED is what higher education should be.  Kamenetz explains, “If you were starting a top university today, what would it look like? You would start by gathering the very best minds from around the world, from every discipline. Since we’re living in an age of abundant, not scarce, information, you’d curate the lectures carefully, with a focus on the new and original, rather than offer a course on every possible topic….You’d also construct a robust network so people could access resources whenever and from wherever they like, and you’d give them the tools to collaborate beyond the lecture hall. Why not fulfill the university’s millennium-old mission by sharing ideas as freely and as widely as possible?  If you did all that, well, you’d have TED.”

I completely agree.  I’ve never been one for tests, so I eschewed formal education as soon as I graduated from university but I love learning and TED has provided a wonderful way for me to be exposed to new ideas, new people, and new possibilities.  As businesspeople, I believe we always need to be learning.

The TEDxSanDiego event exposed me to new developments in medicine and transportation.  I learned how the brain works and how people on the other side of the world live.  I caught some exciting visions of the future and some frightful visions of the present.  I found some organizations I want to support with my time and money because they are doing such meaningful work.  I met people I would never have met anywhere else as well as someone who God clearly wanted me to meet.  And I was challenged to find the question for which the answer would bring me eternal peace.

If all this sounds a little random, it is — to me, randomness is the beauty of TED.  Each person has to figure out how to make sense of all the input and draw their own conclusions — it’ s part of the learning process.  While it’s impossible to relay in words what the TED experience is like, perhaps my recap slideshow of TEDxSanDiego will give you a taste.

P.S.  A great big thank you to the organizers, sponsors, volunteers, and speakers of TEDxSanDiego!