is sorry the hardest word for companies?

When it comes to mishaps, most companies seem to have adopted Discovery’s song “It’s Not My Fault” as their anthem – but it would be so much better for them to follow Akon’s lead and plainly state “Sorry, Blame It on Me.” 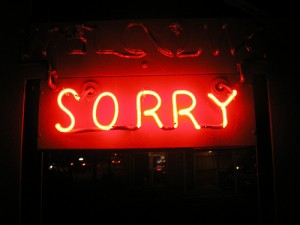 To be clear, I’m not talking about issuing apologies for the sweeping mistakes companies have made for, say, running our economy into the ground — nor about mea culpas for the indiscretions of executives with poor personal judgment.  I don’t even mean the situations in which a company clearly screwed things up for a customer, like failing to provide a promised service or selling a defective product.  By now, companies who haven’t figured out the importance of an appropriate apology in these situations are just helpless and hopeless.

I’m talking about saying “sorry” for little things – the millions of seemingly-forgettable occurrences that happen every day as companies go about their business and end up inconveniencing, or disappointing, or causing some trouble for their customers.

I recently had two experiences that exemplify the right and wrong way to handle these apologies.

First, earlier this week American Airlines sent out an email to their “elite” customers, notifying them that their double elite qualifying miles had been posted to their accounts.  Six hours later, another email followed.  It stated, “We need to advise you of a correction to the email you received earlier today regarding the posting of your double elite qualifying miles, which counted toward your 2009 qualification. The additional elite qualifying miles that have posted to your account will appear on your January Summary which will be available on AA.com on Monday, January 11. We apologize for the confusion. The below email has been revised to reflect this change…”

Given that this was an email communication about a relatively inconsequential error, most people might not have even given it a second thought – but it made an impression on me because I thought it fell short of a good apology.  Why the hem-and-hawing of the phrase “We need to advise you” blah blah blah?  Why not just start out with “We’re sorry.  We sent you incorrect information earlier today”?  And they shouldn’t be apologizing “for the confusion” – they should apologize for the error.  “Confusion” makes it sound like the reader is the one who was mistaken.

Instead of using a bunch of words that sound vaguely like corporate conflict-avoidance, American should have simply and directly stated they made a mistake and they’re sorry.

The other experience happened after I had made a reservation at the local location of Truluck’s, a fine-dining restaurant chain.  Some friends and I had decided to take advantage of the dinner special the restaurant was offering as part of San Diego’s Restaurant Week.  The next day they called me back to apologize and explain that their special was actually $40; the $30 price that had previously been posted on the Restaurant Week website had been a mistake that they were sorry for.

The caller was pleasant, direct, and apologetic. She was also gracious when I asked to cancel my reservation (I don’t do $40 “specials” in San Diego – New York, maybe, but not here.)

Neither of these interactions was really important, right?  The note from American Airlines was one of several emails I got from them this week; the Truluck’s phone call lasted less than 30 seconds.  One might think that I’m making a big deal out of nothing.

But I would argue that it’s the little things that companies do that show their true colors – and ultimately shape people’s brand perceptions.

One of the tools I use when working with my clients is a Brand Touchpoint Wheel. A Brand Touchpoint Wheel provides a visual representation of all the ways people interact with the brand and how they work together – or in some cases, don’t – to impact people’s perceptions of the brand.  When I headed up Brand and Strategy for Sony Electronics, we assembled a Wheel that featured over 270 different touchpoints!  I help companies develop and use the Wheels to identify and prioritize their touchpoints – and understand the changes that internal groups need to make in order to optimize those touchpoints.

Apologies, like the ones I describe above, are indeed brand touchpoints. In American’s case, their apology reinforced the cold, corporate personality I already associate with the brand (despite being a “loyal” customer thanks to those Platinum handcuffs.)  Truluck’s approach endeared me to the brand and the next time I’m looking for a special-occasion restaurant, I’ll be sure to consider them.  Companies need to realize the importance of every touchpoint.

Sir Elton may be right in that “Sorry Seems To Be the Hardest Word” – but companies that say it well, earn customers’ R-E-S-P-E-C-T as only Aretha can sing it!