This is the last post in a mini-series about the F word – failure, that is.

(Previous posts relayed insights about managing yourself through awareness and assessment and managing others with clear expectations and empathy.)

People may not like to fail but according last month’s Harvard Business Review, they should. Most of the 140 pages of “The Failure Issue” were about learning from failure, because it turns out, failure is a great teacher – especially if the learning is deliberate and designed. 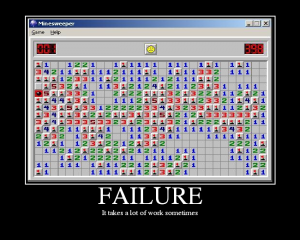 In the issue’s focal piece, HBS professor Amy C. Edmondson wrote, “Only leaders can create and reinforce a culture that counteracts the blame game and makes people feel both comfortable with and responsible for surfacing and learning from failures.” She reports that a critical activity for effective learning is strategically producing failures – in the right places, at the right times – through systematic experimentation.

“In short,” Edmonson explained, “exceptional organizations are those that go beyond detecting and analyzing failures and try to generate intelligent ones for the express purpose of learning and innovating.” To set up a genuinely useful pilot project, the organization should ask:

A couple of other HBS profs suggested learning is the process of updating our theories. So we need to make a conscious choice to challenge our assumptions and models – not only when we fail but also when we succeed. In fact, they suggest that success doesn’t necessarily mean you’re on the right track – it could be you just got lucky.

Instead, organizations need to investigate what led to a win with the same rigor and scrutiny it might apply to understanding the causes of failure. They need to recognize that replication is not learning – the ability to replicate an outcome is important but the focus should be on identifying the root causes of the success and classifying them as things you can directly control vs. things that are affected by external factors. Factors under your control are part of your winning formula.

A Columbia Business School professor’s article built on the concept of “intelligent failure,” a phrase introduced in a 1992 article “Learning through Failure: The Strategy of Small Losses” with seven principles that can help organizations leverage learning through failure. One of the principles is “decide what success and failure would look like before you launch an initiative.” A shared understanding helps to focus everyone on the same things.

Other principles for learning through failure are “Fail fast” – test elements of a project early on – and “Fail cheaply” – make the consequences of failure modest. Both require different approaches to testing: develop early mock-ups of potential new products and show them to prospective customers until you’ve learned enough, then figure out how to build the real thing.

Finally, you need a solid disengagement plan – that is, how to walk away from a project intelligently. Such a plan includes deciding in advance on periodic checkpoints for determining whether or not to continue, assessing if the project team may be falling prey to escalation pressures, and involve an objective, informed outsider in the decision about whether or not to continue, instead of leaving it up to the project team.

When all of these perspectives are taken as a whole, the overarching message is that failure is not to be avoided but rather to be embraced. In fact, designed, deliberate failure is a worthy management pursuit.