Brand Book Bites From The Everything Store

–  the book:  The Everything Store:  Jeff Bezos and the Age of Amazon, an expose of sorts of the world’s largest online retailer. 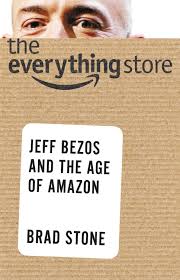 –  the brain:  Brad Stone, senior writer for Bloomberg Businessweek, who usually covers companies such as Apple, Google, Facebook, and more.

–  the best bits:  The Everything Store includes so many revealing insights, fun anecdotes, and interesting facts about Amazon and its founder and CEO Jeff Bezos. A few of my favorites:

Customer Obsession — Leaders start with the customer and work backwards. They work vigorously to earn and keep customer trust. Although leaders pay attention to competitors, they obsess over customers.

Ownership — Leaders are owners. They think long term and don’t sacrifice long-term value for short-term results. They act on behalf of the entire company, beyond just their own team. They never say “that’s not my job.”

Frugality — We try not to spend money on things that don’t matter to customers. Frugality breeds resourcefulness, self-sufficiency, and invention. There are no extra points for head count, budget size, or fixed expense.

–  the brand story:  Of course, the brand story of the book is Amazon — but it’s also Jeff Bezos.  In researching the book, Brad learned that Bezos attended a school for gifted children where he developed a survey to evaluate the teachers based on “how they teach, not as a popularity contest.”  Brad also discovered Bezos’s biological father who didn’t know his son was the leader of one of the most powerful companies in the world due to an agreement he had with his former wife to stay out of her and her son’s life.  Brad describes Bezos as an “avid problem solver…who has a chess grand master’s view of the competitive landscape…and vast ambitions.”  All of this helps create an understanding of Jeff Bezos the brand and makes sense of the way he runs his company.

–  the bottom line:  The Everything Store is a fascinating read about a man and a company who influences the way millions of people shop and live today.

Listen to my conversation with author Brad Stone to learn: