Beyond Sight, Business Lessons Taught by a Blind Surfer

Surfing and business have a lot in common.  Both require agility, just the right amount of speed, and the ability to read coming waves.  The parallels between surfing and business became even more apparent to me as I learned the story of Derek Rabelo, a blind surfer.  You may have seen the popular video of Derek surfing Pipeline. 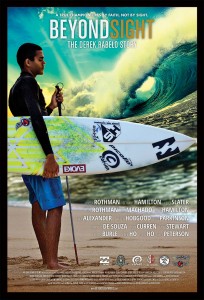 I had the privilege of attending an early screening of Beyond Sight:  The Derek Rabelo Story.  The movie is a wonderful tribute to the remarkable achievements of a 20-year old young man who was born blind and who nonetheless was determined to do a barrel at Pipeline, the legendary surf spot on the North shore of Oahu.  (The movie is the latest film from Walking On Water, a Christian non-profit serving the global surfing community. The premiere isn’t until March 14, 2014, but you can be sure I’ll remind you about it as the date gets closer — and of course, if you want to get involved with the organization, reach out to me directly and we’ll get you plugged in.)

As I watched Derek’s story unfold, I realized there was a lot that we as businesspeople can learn from his experience.  And just as he was able to achieve the seemingly impossible, we can too — if we apply three things his story teaches us:

–  Don’t let fear stop us from doing something.  My first draft of this bullet read “Be fearless” but I realized that not only sounds trite, but it’s also pretty unrealistic.  Fear is a natural response, so trying to not be afraid may be as fruitless as trying to not feel cold in the winter.  I’ve got to imagine there have been times when Derek has been afraid, like when he got swept up in a wave and spent a long enough period of time underwater that friends thought he had drowned.  But what he teaches us is to not let our fear become a barrier to action.

So when a competitor threatens to derail our positioning, we may become afraid but we shouldn’t let our fear stop us from proceeding with our strategy. When market forces rise against us, we shouldn’t stop innovating or taking risks. When we face a decision with an uncertain outcome, we should move forward anyway.

–  Set bold goals and relentlessly pursue them.  Before Derek was even born, his father, a former pro-surfer and surf shop owner, had prayed that his son would become a famous professional surfer.  When his father learned his son had been born blind, he might have given up on that dream but Derek picked it up and insisted that his father take him surfing.  After their first session in the water, Derek signed himself up for surfing lessons without his parents’ permission. He was that committed to learning how to surf.

Once Derek established that he could indeed surf, he decided he wanted to do a barrel at Pipeline (a pretty audacious goal for any surfer, much less a blind one) — and he began a quest to achieve that goal which ended up spanning several years and costing him financially, relationally, and emotionally.  Yet he didn’t let setbacks deter him and he continued to simply, and boldly, ask his supporters for what he needed.

His journey made me realize how we tend to favor achievable goals – after all, we don’t want to set ourselves or our businesses up for failure, right?!  And we quickly we can abandon our goals when the journey toward them becomes too difficult or takes too long.  But as Jim Collins and Jerry Porras proposed in their influential book, Built to Last:  Successful Habits of Visionary Companies, we need to set ‘Big Hairy Audacious Goals‘ (BHAGs) and we need to commit to them.  Instead of aiming to gain a few points of market share, perhaps we should set out to take over an entirely new market.  Instead of hoping for a successful new product, perhaps we should be working on developing a new way of living.  Instead of trying to get promoted, perhaps we should figure out how we can do what we love and become successful doing it.

Derek shows us what can happen when we are relentless in pursuing our goals and when we boldly ask people for what we need to achieve them — which brings me to the third principle we learn from Beyond Sight.

–  Humble ourselves and let people help us.  I won’t ruin the movie by telling you how Derek eventually achieved his goal, but I will explain that it involved relying on someone else.  He was able to surf a barrel at Pipeline only because someone else helped him.  The decision to allow someone else to help didn’t come easy – Derek resisted the notion for a long time, but he finally concluded that it was the only way.

How many times have we been too proud to ask for help or too stubborn to consider someone else’s advice?  How long have we waited before admitting we’re in over our heads?  How often do we insist on building something on our own instead of partnering with another organization that already has the solution?  How reluctant are we to ask our competitors for help even if we’re fighting against the same enemy?  A little humility can go a long way in the journey to success.

I can’t wait for others to watch Beyond Sight.  A blind surfer can help us see our challenges, our goals, and most importantly ourselves in a new light.