My recent piece, “Strategy IS Execution,” prompted quite a few reactions.  In it, I wrote about how it no longer makes sense to separate the value of strategy from the value of execution because execution is actually becoming strategy.  I’ve learned a lot from the ensuing comments and conversations. 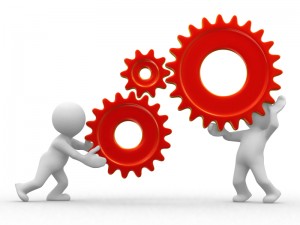 Perhaps the most enlightening was a discussion I had with Michael Lurie, Founder and CEO of Blue Mine Group, a consulting firm that helps design agile companies that leverage the economic power of specialization, innovation and collaboration to create sustainable value for all stakeholders.

As Michael took me through the approach he’s developed (based on his career which includes working for McKinsey, starting three companies, and consulting with over 150 companies in many different industries), I came to realize that there is an important distinction between strategy as manifested in traditional strategic planning and strategy as organizational design.

Plotting out annual strategies to increase market share or planning a multi-year product pipeline are activities which seem dated and fruitless, given the increasing rate of change and degree of disruption in today’s marketplace.  But, designing a business model and organization structure remain important tasks.

In some ways it’s like the difference between the way military wars used to be fought and the nimbleness and flexibility that’s required in modern warfare.   Instead of continuing to plot elaborate battle plans and sequential campaigns, the military must now ensure it’s got the right capabilities and the right tools to fight the unforeseeable moves of independent terrorist cells and forces under leaders of unstable governments.

So, strategy is less about plans and more about design.  As Michael put it to me, “Strategy is a design discipline.”

What follows are more thoughts Michael shared with me via email.  Of note, he points out that my original piece seemed to diminish the role of thinking vs. doing.  While that was not my intent, I recognize that my encouragement to move away from the traditional practice of strategy overlooked the importance of getting – and keeping — the right building blocks in place.  Michael’s comments are a long read but they’ve been helpful to me, so I thought I’d share them with you (emphases are mine).

I think the idea of design is of foundational importance, so I think the alternative to planning is more than just decision-making. Like any designer, company designers should have a vision of what they are trying to create, and be constantly experimenting to design and build a(n economic) system that brings that vision to life. Along the way, they’re making lots of decisions, but that’s not the emphasis. Much of the strategy literature (and many companies) get caught up in “making strategic decisions”, by which they normally mean spending large sums of money to do something that may be quite risky and will be difficult to undo. That is an industrial economy mindset that can pay off through luck today, but normally ends in grief. So I prefer to think of design, not just decision-making, as the approach to “strategy” companies need today.

There is a distinct difference between designing and implementing (in fact between designing, building and operating) the system. To that end, saying that strategy is execution may cause the “don’t think, just do it” crowd to believe their approach is the right one. In my view, both thinking and doing are needed, but they are distinct, though they may be experienced simultaneously. Some of [Daniel] Kahneman‘s work (e.g. Thinking, Fast and Slow) is relevant here – i.e. thinking that happens while we’re executing (in the heat of action) is different from the kind of thinking we do in thoughtful after action reviews. Both are important, and need to happen in parallel – that’s actually what experimentation is all about. I believe great designers both think deeply and execute brilliantly every day – but almost certainly doing one or the other, not both, at any point in time in the day.

Most executives in my experience would like and applaud your emphasis on assembling the right team and then focusing on execution, decision-making, discipline, action and results. All of that is critically important to bring designs to life, and suits the traditional “macho” approach that underlies much of traditional management. However I have worked with many star-studded teams doing all of these things who were brilliantly executing a flawed design. The result always will be failure.

I think we’re saying the same thing (you need to do both), but to me your article comes across as strongly favoring execution.  While most executives are aware that much of planning is a waste of time as you describe, I think they need to understand that the alternative is not just to execute as best you can on the path you happen to be on. It’s to go forth as a great designer, develop a compelling vision of how things could be, and then rapidly, iteratively and experimentally, but with great creative intent, evolve a living system that brings that vision into reality. To me, this is central to the uniqueness of being human.

One final thought – the quality of the design – the extent to which it creates value for all stakeholders and makes it easy for them to realize that value – has a huge impact on the quality of the execution. Much of the reason things don’t get executed is not because there wasn’t sufficient discipline, action etc.   It’s because of systemic barriers, mainly things like people feeling threatened, not valued, not adequately compensated, etc. In other words – it’s a design problem, not an execution problem. In my experience, many executives struggle to distinguish between these. At a current client, the executives are always complaining about how difficult it is to get the delivery function to execute despite clear goals, action plans, etc. – while continuing to provide inadequate tools and misaligned compensation to the folks in delivery.

It will be simple to solve the problem, but it requires a fundamental shift in their mental models. The reason the executives at this company aren’t willing to invest more in delivery is because of a couple of common problems (a) memory of doing so in the past when it came back to hurt them (what actually happened was they tried to invest in a flawed design) and (b) a conscious or subconscious zero sum, win-lose mentality. They need to learn through low risk, low cost experimentation – tangible, demonstrated experience – that if they pay people differently and give them better tools, execution will get better, and everyone will be better off. By doing so, and with the right coaching, the executives will come to recognize that their own mental models have been hampering their progress, and that by designing the system correctly (to avoid the mistakes of the past and reward all stakeholders) they will unleash a virtuous cycle that will enable execution to keep getting better and better, continually improving customer satisfaction, employee engagement and return to shareholders.