Recently several manufacturers have announced that they are initiating an e-commerce business.   I’m not sure of the motivations behind these moves but it seems to be a growing trend. Although many manufacturers have been offering direct sales for many years through their own e-commerce sites, it seems we’re seeing a new surge of interest in doing so from players who have historically shunned the idea.

And this got me thinking about how a manufacturer could do e-commerce in a way that doesn’t simply cannibalize the sales would be generated by a third party distributor or retailer, but instead would increase the value of the brand which is delivered to the customer. I can think of three ways a manufacturer might do this.

Kipling is an example of a brand that has strategically used product selection on its own website.  Kipling is a maker of travel bags, handbags, backpacks, and other accessories.  Its products are primarily sold through department stores, travel goods retailers, and a select number of Kipling retail boutiques. 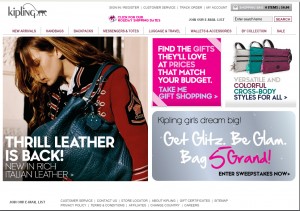 Several years ago the Kipling team launched its own e-commerce site — and with its exclusive product selection, it was able to strengthen its brand perceptions.  You see, Kipling was growing its handbag business but some retailers were not interested in carrying a wide selection of Kipling handbags because it was an unproven product line competing for shelf space with established choices.  So Kipling used its own e-commerce site to roll out and promote its full product lines of handbags.  As such, it was able to expand the brand footprint and merchandise the best of what the brand was becoming.

The second way a manufacturer can increase the value of its brand through its own website is by offering customized product — either the ability to select certain features on products and/or allowing people to add their own personal touches to the product.

A good example of this is NikeID. 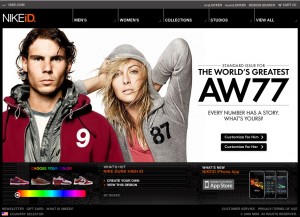 On the NikeID site, people can customize nearly every kind of Nike product.  In many cases, the ability to customize is quite extensive.  On footwear, for example, customers can indicate their preference on functional, performance variables like base material and cushioning technology – and they have style-oriented choices like selecting the color of the shoelaces and having their name or other text stitched onto the shoe.  Customers can also use the site to show off their designs to others and/or view designs from around the globe for inspiration.  As such, the site serves to further the promise of self-expression which is at the core of NikeID brand.  And this is only possible through NikeID’s own channel.

Manufacturers can also use their own sites to foster brand community.  Many retail sites feature their own community (e.g., Best Buy’s Twelpforce), but that community is focused on the retailers’ brand.  A manufacturers’ e-commerce site enables the manufacturer to develop an exclusive community for its own brand fans.  A good example of this comes from LeCreuset, the cookware brand established in 1925. 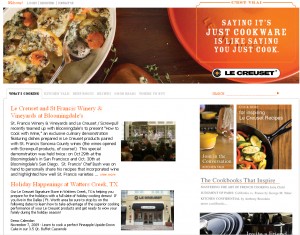 The folks at LeCreuset had noticed that LeCreuset customers loved sharing with each other on other cooking sites recipes, tips for usage, and stories about the LeCreuset brand and the importance of it in their lives.  They wanted to participate in the conversation and lead and inform it, so they launched their own e-commerce site.  In addition to giving users the ability to post content, create profiles, and share recipes, the brand team posts interesting tidbits about the brand, introduces new products, and solicits new ideas, etc.  Through the site, LeCreuset not only sells directly to consumers but more importantly engages with consumers and fosters the kind of community that builds brand affinity and loyalty.

Earlier this year I had written a post called “can anything retailers do, manufacturers do better?” It was inspired by a conversation I had with someone about the unique advantages that retailers have over manufacturers.  It was written in part as a response to the many retailers who were developing their own product lines as a way of trying to compete with the manufacturers’ brands they carried.

Between the two posts there are the common themes of differentiation and added value, both of which are important concepts for brand-building and business growth.   I would suggest every strategic business move including introducing a new website ought to further differentiate the brand and/or deliver additional value to customers.   Otherwise, why do it?!

If you’re only going to launch something in order to be comparable to existing alternatives, the growth that comes from that launch is inherently limited because the most you can hope for is to steal share from those existing options.  However if you are truly differentiating your offering and adding value for customers, not only can you get a larger slice of the pie, but there’s also the potential to grow the size of the pie itself.