McDonald’s All-Day Breakfast and Other Calls I Got Wrong

As a competitive Asian Type-A perfectionist, admitting I’m wrong can be painful.  But discovering I was wrong about some developments in the business world has actually led me to learn some valuable lessons.  I thought you might benefit from my new insights, so here are six calls I got wrong starting with McDonald’s All-Day Breakfast: 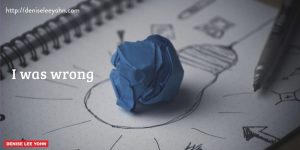 #1 McDonald’s All-Day Breakfast.  Last year, Stuart Varney, of FOX Business TV’s Varney & Co., asked me if I thought McDonald’s decision to serve breakfast all day would boost its brand.  I told him McDonald’s would see a short spike in sales because of the novelty, but then its business would go back to struggling.  Given that other brands had been serving all-day breakfast for years and given that McDonald’s had made only certain breakfast items available at certain locations, I didn’t think it would make a substantive difference.

What I didn’t factor in was that breakfast items would serve as alternatives for people who don’t like any of McDonald’s other products.  By making some of its most popular products available throughout the day, the company ended up boosting its overall sales 5% in Q4 of 2015 and they continued to rise 6.2% in the first quarter of 2016.

–> Lesson learned:  Don’t judge a solution by its face value.  If I had thought more broadly about how all-day breakfast might address McDonald’s other problems, I wouldn’t have been so quick to dismiss it as a solution.

#2 Starbucks VIA.  Back in 2009, Starbucks started selling VIA, its instant coffee products, and I cried “foul!”  Actually a colleague of mine wanted to write a guest post on my blog deriding the decision and I happily supported him because I agreed with him completely.  Our POV was grounded in the insight that the Starbucks brand was about more than just the coffee — it was (and still is) about the experience — and so, we believed packaged instant was an inadequate representation of the brand.  Our case was supported because this development arose when Starbucks was suffering from overexpansion and lots of other brand dilution problems.

We might have been the only two people on the planet that thought this — everyone else was buying VIA.  In its first 10 months alone, VIA sales were over $100 million — and it has only grown in popularity, with dozens of product varieties available and retail distribution expanding.  My personal confession is that I am sipping a VIA Instant Caramel Latte as I write this post.

–> Lesson learned:  Don’t underestimate a great brand — and a great leader.  Starbucks was able to pull off the VIA feat because CEO Howard Schultz and his team were committed to ensuring the product would be up to the standards of the brand.  They also knew their customers well enough to know VIA would make the brand more convenient, accessible, and affordable without cannibalizing store sales.

#3 REI Black Friday.  When the outdoor retailer REI announced last fall it was closing all its stores on Black Friday and paying employees to “head outside,” I praised the decision but predicted in a FierceRetail op-ed it “may be costly in the short-term due to the loss of sales, but it will almost certainly build great value for the brand in the long run.”  I’m so glad I was wrong about the first part of my prediction.  REI ended up experiencing a 10% bump in online traffic on Thanksgiving, a 26% rise on Black Friday, and 9.3% increase in revenues for 2015 as a whole.  And they just announced they are repeating and expanding the effort this year.

–> Lesson learned:  Expect customers to do the right thing.  While I’m sure some of REI’s success was due simply to the increased brand awareness generated by the extensive press coverage of its decision, the results also reveal how people are changing their purchasing behavior to align with their values.  I should have given shoppers more credit and expected them to reward REI for courageously living by its values.

#4 Domino’s Pizza Turnaround.  Remember when Domino’s ran those ads announcing their new pizza recipe?  The videos included footage from focus groups showing customers ragging on the chain’s pizza and Domino’s employees recounting all the negative feedback they’d gotten about their products through the years.  I railed on the company in a blog post saying, “By declaring how bad their pizza has been, Domino’s is essentially saying to its customers ‘you suck’…we’re made to feel like idiots for having bought the stuff…This violates one of the primary rules of brand communications I learned early on in my career.  That is, always make your customers feel like heroes.”

I don’t think I was wrong about that last point, but the company did manage to turn itself around.  It’s enjoyed significant improvements in customer satisfaction, company revenue, and business growth in the last few years in large part due to the Pizza Turnaround campaign.

–> Lesson learned:  Honesty and humility really stand out in a world where puffery and promotion are the norm.  I didn’t realize the company’s self-assessment and sincere apology would offset any potential backlash.

#5 Target CEO Brian Cornell.  I wasn’t optimistic when former Pepsico executive Brian Cornell was named as the CEO to revive Target.  I didn’t think a packaged-goods guy known for relying on analytics and data-driven decision-making would get the finesse of the Target brand.  I thought he’d emphasize improving the chain’s e-commerce capabilities and ignore the brand’s primary asset, its stores.   But he’s managed to do both — and to make a whole host of other changes that have turned the company’s fortune around.

–> Lesson learned:  As with Starbucks, I had underestimated Target and Cornell.  Hope I’ve learned my lesson.

And #6, the hardest to swallow — Donald Trump.  In my predictions for Brands to Watch in 2016, I wrote, ” Donald Trump most certainly won’t be the Republican Party nominee but what happens between now and when it comes time for him to disappear will be entertaining and educational about politics and culture today.”  It’s clear how wrong I was.

–> Lesson learned:  I’ve stayed away from political commentary since I got some backlash from what I thought was an innocuous article I had written last fall about Trump, so I hesitate to get into it too much now.  But since I really do want to share helpful insights for brand-builders, here are the brand-building conclusions I think can be learned from Trump’s ascendancy and Clinton’s loss:

What about you?  Care to share a call you got wrong and what you learned?  Don’t let me be the only one with egg on my face.  Please use the Comments section below.