LinkedIn Top Companies Have These Three Things In Common

LinkedIn Top Companies 2018 list, published just a couple of weeks ago, includes the companies that we all expect (#6 Apple and #46 Starbucks); but it also features some surprising ones, including Uber (#12), Dell (#17), and PwC (#25).  So I conducted an analysis to see if there are any commonalities among the list of top employers and what I found surprised me. 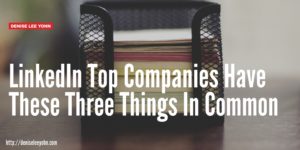 Several of the 50 companies have been plagued with controversy (#2 Google/Alphabet and the #39 NFL), others lack broad brand awareness (have you heard of #37 Citadel or #38 Kering?), and still others seem kinda boring (I’m not going to name names on this one).  So I shouldn’t have been so quick to try to predict which companies found their way to the top of the list.

The employers on LinkedIn’s Top Companies list has a lot to do with how the company developed its list.  Daniel Roth, LinkedIn’s Editor in Chief, explains that the company analyzed billions of data points generated by LinkedIn’s 546+ million worldwide members to assign a “blended” score to each company.  As such, the factors include only those data points from LinkedIn — e.g., “job demand” is measured by the number of people viewing and applying for jobs through the platform; “company engagement” is based on the quantity of professionals who viewed a company’s career page and the quantity of new followers a company attracted.  LinkedIn then “normalizes all the results to ensure that companies are measured against peers.”

So clearly the list is a reflection of LinkedIn’s user base as much as, if not more than, a report on most attractive employers.  But nonetheless, my analysis of the list reveals that LinkedIn Top Companies have these three things in common:

Analyses of the list by other people also show: